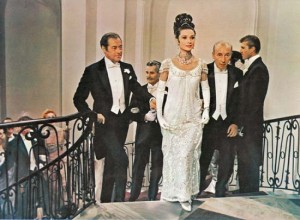 “Why Can’t A Woman Behave More Like A Man?”

“Oh, Henry Higgins, just you wait.” My Fair Lady (1964) is musical film version of a musical theatre adaptation of an earlier film adaptation of a play called Pygmalion. Exhausted yet? It stars Audrey Hepburn as Eliza Dolittle, a poor flower girl whose alarming low-class accent catches the ear of Prof. Henry Higgins, played by Rex Harrison. Professor Higgins makes a social experiment of Eliza, vowing to transform her accent and therefore herself into (what he deems to be) a right proper lady of the 1880s. My Fair Lady is a fantastic movie full of great musical numbers, Audrey’s amazing acting prowess, and a surprising number of feminist sound bites.

I stumbled across My Fair Lady a few years ago during a personal film challenge to watch as many classic movies as possible. This has to be my favourite Audrey Hepburn film – I’m not a huge Breakfast at Tiffany’s fan, and Roman Holiday’s a bit flat in the middle, although I’m still holding out for The Children’s Hour – because she really shows off her mastery of outlandish accents despite a normally quite cool and collected on-screen demeanour.

At the beginning of the film, Audrey’s character Eliza is a bedraggled young woman selling thrown-away flowers on the street to get by. Despite this, she’s a lively character whose best describing word would be ‘indignant’ – her indignant attitude outside the theatre is how Prof. Henry Higgins comes to find her, and her memorable accent – one that he seems to find very alarming, and quite affronting indeed. Higgins jokes with his newfound friend Colonel Pickering (Wilfrid Hyde-White) that he could have a girl ‘like’ Eliza sounding like a ‘proper’ maid in six months. They find this idea very hilarious, but Eliza finds it inspiring.

Eliza seems to the audience to want to get ahead in life for the simple pleasures that we take for granted. In the song “Wouldn’t It Be Lovely“, Eliza expresses that she chooses to go along with Higgins and Pickering’s plan so that she can help herself to have somewhere warm to sleep…and lots of chocolate for her to eat! Eliza is a relatable, heart-warming protagonist. I think the producers banked on Audrey’s ability to show the heart of anyone, despite how different they are. Higgins…Higgins…Hmmm. I wish he melted like the Wicked Witch of the West at the end of this movie. He’s a sexist character who makes me wish violent things on him; I’ll talk more about why in a moment.

The musical numbers and the staging feel quite true to a musical stage play in that the musical numbers are often precluded and interspersed with spoken dialogue. The word play is intelligent and catchy, translating quite well to screen. This is seen superbly in Henry Higgins’ musical numbers. Higgins’ songs, like his character, are extremely sexist, and when I first watched this movie, I was half outraged until we saw his silliness being commented on by other characters. Back when I first saw My Fair Lady, I hadn’t fully grasped something I steadfastly believe now: a good majority of well-made Hollywood classic films go against the grain and are super progressive. My Fair Lady owes a lot to the stage play – but even with a more romanticised ending, it’s still an awesome comment on the ignorance of sexist men, gender expectations and stereotypes, and classist discrimination. The audience watches as Eliza is humiliated by Higgins in order to achieve her goal, the way she is applauded and paraded around like a little doll at balls…only for her to really end up trumping the men who treat her like crap, achieving her goals and staying true to herself. Upon a second recent viewing, I realised that my initial end rage of “WHYYYYYYYY WAS THERE NO “WHY CAN’T A MAN BEHAVE LIKE A WOMAN” SONG? WHYYYYY DID IT END WITH ROMANCE???” was misplaced, because I’d missed out on a wonderful feminist moment from Eliza that is really at the heart of the film.

“The difference between a lady and a flower girl is not how she behaves, but how she is treated.”

Ha! Take that, Henry Higgins! Eliza doesn’t need your stupid accents to make herself into a lady, whatever that means – if you were a decent human being, you’d treat her like one too!

Admittedly, the movie does end with an insinuation of romantic feelings between Eliza and Higgins (gag), and really, there are more sexist moments then there are feminist ones. And mayyybe he sort of gets the last laugh. But I feel like the quiet feminist moments triumph over Higgins’ garbage, and really, his attitude is lampooned as one of the many funny aspects throughout the film. (Look at me, justifying this movie!)

And okay, for those who aren’t going to watch this film for the rage-inducing musical numbers, the feminist highlights or AUDREY, My Fair Lady’s staging, cinematography and costuming is stellar and worth watching for. In particular, the mod monochromatic costuming of the Ascot Races scenes convey a wonderful stage tone and makes me watch in materialistic appreciative awe every time I see it. It’s quite a contrasting choice in costuming to the rest of the film, which is quite realistic, but it kind of makes those scenes a bit more smashing. The film is stocked with a fabulous supporting cast who make up much of the comic relief, including Stanley Holloway as Eliza’s father, and bring the morals home, such as Gladys Cooper as Higgins’ mother.

All in all, if you’re looking for a fun musical from yesteryear that isn’t cringe-worthy, has a great cast and satisfies your feministy classical movie fixation (or is that just me?), My Fair Lady is for you!

Fun fact! Audrey Hepburn’s singing was not used in the film; she is dubbed by Marni Nixon.