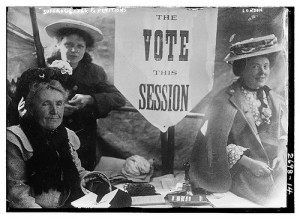 ‘A woman’s opinions are useless to her, she may suffer unjustly, she may be wronged, but she has no power to weightily petitions against man’s laws, no representatives to urge her views, her only method to produce release, redress, or change, is to ceaselessly agitate.’

– Louisa Lawson, speech to the inaugural meeting of the Dawn Club. Published in Dawn, July 1889.

Today, Friday 8 March, is International Women’s Day, and while there is much work to be done with regard to gender equality, it is the perfect time to reflect on the battles fought and won by women long before I was born; women I may never get to meet. This list is in no particular order and is definitely not exhaustive, but rather it is a list of things that, without the efforts of certain women, may never have changed.

In the early 1900s, women who wanted an education were viewed as trying to imitate men and their main role was their domestic duties. Women could access tertiary education, however their participation rates were low and there were difficulties once they obtained their degree and entered the workforce. It wasn’t until the Women’s Liberation Movement in the 1960s and ’70s that these rates began to rise. Women enrolled in tertiary education today have surpassed men and have increased in non-traditional areas, such as engineering. If it were not for women like Germane Greer and Dr Anne Summers publishing influential work and the formulation of the Women’s Liberation Movement during the ’70s and ’80s, the shift towards women participating in tertiary education may never have perpetuated.  Whilst participation rates in some areas of study are still low, it is now normal for women to study towards their chosen career. I am thankful to have had access to quality education and been able to have almost completed my third tertiary qualification.

2. Choice over my body

The pill was available in Australia in the 1960s, but initially was only available to women who were married. Research behind the Pill continued throughout the 1960s and it was not smooth sailing, with a number of negative side effects reported. The Pill was highly taxed as it was considered a “luxury” item. The Women’s Electoral Lobby, founded in early 1972, campaigned to lift the restrictions on access to the Pill, and provide wider access to women in society. This campaign was successful and changes were made by the newly elected Prime Minister Gough Whitlam in 1972, shortly after the national election. It is estimated that over 100 million women worldwide use the contraceptive pill. I am thankful that women have been given the choice to take control of their body through the use of the contraceptive pill; that it is considered “normal”, not a “luxury”.

3. Social media and the internet

Hear me out on this one! There have been a few cases in the past few months were women have been discriminated against for breastfeeding in public. While it has highlighted many people’s ignorance that this right is protected by law, it has been social media and the internet that have brought the issue to the forefront. We are able to raise awareness and make people accountable for their actions, which can lead to effective and positive change within the community. We are able to connect with like-minded individuals and to rally with and support each other when faced with challenges.

I am thankful for the fact that if something happens and I’m aggrieved, I can do something about it. Many women in the world today don’t have a voice. I can blog, I can write, I can speak out. My voice and opinion can matter.

5. The right to vote

The Women’s Suffrage Movement in Australia was at the forefront of debate at the time of Federation. Women like Rose Scott, Henrietta Dugdale and Edith Cowan fought hard to have women counted as voters and elected as Members of Parliament. At the time of Federation, women were allowed to vote, but not to be elected, and it wasn’t until legislation was passed in 1920 that women were given this right. Edith Cowan was the first woman to be elected as a Member of Parliament in 1921. Although Australia was one of the first nations in the world to provide women the opportunity to vote in 1902, we didn’t elect our first female Prime Minister until 2010. We were ahead of the rest of the world by allowing women the right to vote at Federation it was because of the suffragette movement being led by dedicated women who were not afraid of speaking out, demanding to be counted and to be considered equal to their male counterparts. I am thankful for the hard work of the women who paved the way for all women to participate in the democratic process and allow our opinions to be heard.

There are still some instances where gender discrimination may still occur within the above areas, but still, it is good to reflect on how far we’ve come.

What are you thankful for? Tell us below!