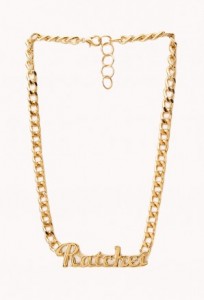 It has not been a good year for US retail giant Forever21.

The trendy chain store found itself in hot water earlier in the year for a leaked company memo that indicated the ‘slashing’ of work hours and health care benefits for all retail employees.

More recently, Forever21 came under fire on Twitter for releasing a new line of t-shirts that many felt were racist due to their slogans, among which were the statements ‘City of Compton’ and ‘Ice Cube’. The models wearing the t-shirts, being Caucasian, sparked further outrage from their followers, and the brand promptly took the t-shirts off their website.

It seems that casual racism in their products has once again flown under the radar for the retail store. They have recently designed a so-called “street-chic” necklace featuring the word ‘ratchet’, which has a similar meaning to the word ‘ghetto’, used as ‘the go to word for all things gaudy’. Forever21 has, again, brought to light the question of what exactly is racist, and when has a brand gone too far?

While the word isn’t exactly a racial slur, the context in which Forever21 is using it to market their jewellery is questionable. One article begs the question: ‘Can we really blame them, though?’ Sure, celebrities like Beyoncé and Lady Gaga may have sported the word, possibly making it more widely acceptable to be used in everyday conversation.

But the issue here is where to draw the line. If Forever21 makes it okay to use ratchet to describe someone or something, how long before they’re painting a much deeper and convoluted picture of race perception with their clothing and products?

In an article for Racialicious, Tami Winfrey Harris addresses the issue of cultural appropriation. Similar to Forever21, retail store American Apparel recently brought out a line of clothing that they call ‘Afrika’, which is predictably full of animal and tribal print clothing. Tami, on her blog, has claimed the clothing line perpetuates ‘exotification, othering, cultural commodification and, well, stupidity.’

In her article for Racialicious, she says that this is inspiration ‘drawn from a historically oppressed culture’ and, on both accounts, I have to agree. No, I’m not of the opinion that wearing animal prints encourages racism. Far from it. The problem, just as Tami has put it, is ‘distilling a continent of many countries, cultures, languages and peoples down to its wildlife and faux tribal print.’

I can already imagine the ‘too sensitive’ and ‘it’s just a piece of jewellery’ comments that litter Facebook and other websites in the face of these issues. But this is what spurs retail giants into making products like the ratchet necklace. The casual sense with which people of all ages make racial comments, without even realising the intention or the pain behind the words, is worrying to say the least.

I frequently have to stop myself from firing up at a friend’s use of certain words that, whether they know it or not, have a plainly racist history behind them. While I personally find it disgusting to use such words in every day conversation, I know so many who have no problem saying it, most worryingly as a joke, too. It just brings to light the ignorance with which people operate, and I wonder, if they knew where certain words came from, and the connotation they imply, whether or not they would actually be using them at all.

By rejecting that this necklace is in any way insulting, we are perpetuating the cycle of denial, particularly in first world countries, when it comes to racism. We are permitting the next generation to use words like this, not knowing where they come from or what they truly mean.  We – and by this I include retail stores like American Apparel and Forever21 – should be educating the younger generation on the use of words like ‘ratchet’, and on the intelligent ways to conduct a conversation: without racism.

One thought on “forever21 sparks racist claims with ‘street-chic’ necklace”