hollywood flashbacks: standing by your man in casablanca 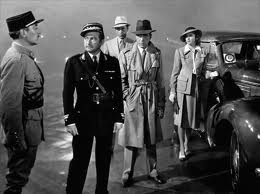 Casablanca is one movie that even film buffs can agree is a classic. There aren’t many films like this – in any group of people, someone will always want to be the one with the ‘original’ opinion, i.e. the person that hates that thing you really like. (Because with Casablanca you can’t say you liked it before it was cool.) I’m not going to be that person. I really like this film. I just have some reservations about it.

In case you haven’t seen it, or if you need a refresher, Casablanca is the story of a disillusioned American, Rick (Humphrey Bogart), who’s set up shop (well, set up nightclub) in the Moroccan city of Casablanca, which has become a stop on the way for hordes of people fleeing Nazi-occupied Europe in the Second World War. Rick’s getting along pretty well, making money and staying politically neutral (spoilers! It’s a metaphor for America’s involvement in WWII!), until his old flame Ilsa (Ingrid Bergman) wanders in with her husband, Victor (Paul Henreid). After a few rounds of ‘As Time Goes By’ and some flashbacks to a romance in Paris and Bogie’s heartbroken face at a train station, we learn that Ilsa was married – to famous political prisoner and Czech resistance leader Victor Laszlo – the whole time they were together. She and Rick still seem to be in love, and the film centres around whether or not they will give up everything for love, or give up love so that they all (but mostly Laszlo) can stand up to the Nazis.

It’s arguably a ‘perfect’ film. As in, no flaws are really apparent. It’s well acted, beautifully shot, able to be funny and sad and suspenseful. It looks amazing in black and white, and what’s maybe the best guarantee of status as a classic, there’s no way it could be remade today. No one would want another version of it; this one is just fine. But, its perfection is as a film made in the ‘golden age’ of Hollywood, under the studio system which churned out so many hits and so many flops every year. It was kind of a coincidence that it turned out so well – everything fell into place at the right time, which didn’t always happen in those days.

First, the leads had great chemistry. Not only Bogart and Bergman, but also Bogart and Claude Rains, playing the slightly corrupt police chief and who has a lot of the best lines. When he and Rick walk away into the fog together at the end of the film, you don’t mind so much that Ilsa just made the decision to leave. Then there’s the directing, cinematography, and the memorable use of ‘As Time Goes By’ to tie everything together.

Secondly, it was the right film for its time – an uplifting tale of heroism and sacrifice on the part of individuals for the greater good, released in 1942, in the middle of a war that many Americans were ambivalent about. It was popular at the time, and even more so as the years went on. I’m not sure this second part of the equation as well today, however. I left a recent screening at the Astor a bit less in love with Casablanca than I used to be.

This is mostly due to the characterisation of Ilsa. Her appearance propels the main plot of the film, but she’s mostly a passive figure, caught between two men and having to choose between them. Ingrid Bergman was apparently unaware until the day of shooting the final scene what the ending would be, but really the choice has been made for her – obviously she will do what is morally right, thereby  helping the war effort, and also conveniently standing by her husband instead of betraying him. (Censors in the 1940s, who could actually prohibit a film from being released due to its moral content, probably wouldn’t have allowed Ilsa to remain with Rick anyway.)

But it’s not a choice that is exactly right for Ilsa. It seems all she will do in the future is remain by her husband’s side, inspiring him to do great things. This is her only acceptable role, and the film does not give her any characteristics or abilities other than being a good companion. She has no backstory, unlike Rick – she’s really just a beautiful face. “Here’s looking at you, kid” is a great line, but that is all men do – look at her.

So I found myself conflicted – this is still an aesthetically perfect film, with some great lines, and it’s something that perfectly encapsulates the golden age of Hollywood. But as time goes by, I’ve found that it doesn’t hold up as well as it should.

One thought on “hollywood flashbacks: standing by your man in casablanca”