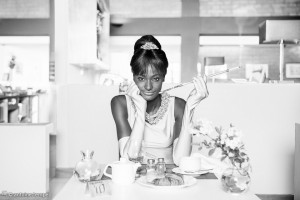 ONOMOllywood, is a project that challenges our perceptions of race in classic films. Unfortunately, looking back at the well-known classics brings to mind protagonists who are almost exclusively white. But Dakar-based photographers, Omar Victor Diop and Antoine Tempe, are changing the way we think about this.

ONOMOllywood consists of a series of 20 photographs where the ubiquitous white faces from Hollywood classics are replaced with black ones. The photographs include blockbusters such as Breakfast at Tiffany’s and Thelma and Louise, with an underlying question of, ‘Would you see these classic scenes differently if the race of the lead characters were different?’

The two chose to use cinema because they believe it to be the most universal form of art. Through using it they hoped to transcend barriers of race, geography and culture.

However, after an interview with CNN, there was a backlash the photographers didn’t anticipate.

‘We were taken aback by the racial dimension of some readers’ comments. To my great surprise, I realised that this series could be seen by some as a sort of “revenge” of black people against a too “white” Hollywood.’

Diop never expected the ‘race war’ that had begun. Nevertheless, the two are pleased to have started a conversation between continents.

‘That’s the purpose of art,’ said Diop. ‘…For us, ONOMOllywood remains a celebration, a well-deserved homage to geniuses of cinema, to timeless moments.’