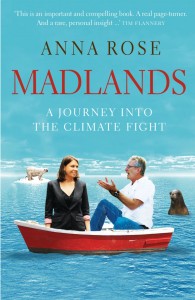 You may have seen Anna Rose recently on the ABC special I Can Change Your Mind on Climate Change or the Q&A that followed it.

At 29, Rose is an inspiring figure. In 2008 she graduated with first class honours in law and arts from the University of Sydney, but it’s an initiative she worked on while she was there that is most impressive. In 2005,  she lead a campaign for the university to switch from coal-fired to renewable energy, which ultimately resulted in a 90% favour in the first student referendum in over 27 years, and to the Vice-Chancellor committing one million dollars to fund renewable energy research and development.

She co-founded the Australian Youth Climate Coalition (AYCC) and continues to chair the organisation, she’s  a member of the Environmental Minister’s Advisory Council on Environmental Education, and is an associate of the consultancy agency for not-for-profits Make Believe.

She’s also found time to volunteer on Obama’s presidential campaign (to explain to American voters that their vote has worldwide consequences), be named one of Sydney’s 100 influential residents, co-author the book Future by Us, and complete a Churchill Fellowship. During all of this, she’s managed to fall in love and marry the director of Get Up! Simon Sheikh (how much would you love to have dinner at their house?).

Earlier this month Rose released her second novel, Madlands, which is about the time she spent with Nick Minchin during their filming of I Can Change Your Mind on Climate Change. She’s still finishing up her three month book tour, and appeared at The Sydney Writers Festival to speak about Madlands. I attended her SWF talk (which was chaired by Sheikh) and in person she comes across as being passionate, considered, and humorous.

Rose kindly answered some of our questions about climate change and her experience on Madlands below.

In a recent CSIRO survey about Australian attitudes towards climate change, 77% of respondents said they agreed it was happening. Do you find this is reflected in the public’s actions?

A Newspoll survey last year and a recent Ipsos Mackay survey both found that 90% of Australians accept human activity is either partially or fully responsible for causing climate change.

Even Nick Minchin, when he met with the conservative MP Zac Goldsmith in London, admitted that the world has warmed and that human activities probably caused part of that.

But the people we should listen to most closely in this debate are scientists, not opinion polls. Climate change is not a conspiracy or a plot. It’s science! And for decades, scientists have been warning us that we are causing great harm to our climate – and in the process risking our economy, our food security, health and our way of life.

In the peer-reviewed scientific literature, there is no reasonable doubt left about the science of climate change. The climate scientist David Kaoly from the University of Melbourne points out that there are 1000 – 2000 scientific papers about the climate and not one of them questions the scientific consensus that climate change is happening and is caused by humans.

Most Australians accept this, but we’re still seeing a gap between understanding and action. We need to move forward past the bitterness of the debate around the carbon price and remind Australians why we need policies like this in the first place – to protect young people’s future from dangerous climate change.

If you had 30 seconds to try to convince someone that climate change is happening, what would you say and show them?

First, that greenhouse gases trap heat in the atmosphere (we’ve know that from basic physics since the 1800s).

Second, that humans have emitted greenhouse gases since the industrial revolution.

Third, that since the industrial revolution (when we started pumping these heat-trapping gases into the atmosphere), the world has actually warmed. We know this because scientists have measured clear warming trends in the air, oceans and land. Carbon pollution has risen 40% since pre-industrial levels, and this has caused a global average temperature rise of almost one degree Celcius. Scientists predict that unless we reduce global emissions of carbon pollution, the world could warm an average of 2 – 7 degrees higher than pre-industrial levels.

Why should we be pushing for renewable energy now?

The things we need to do to reduce carbon pollution to solve climate change are things that we would need to do anyway to reduce energy waste and create healthier and more liveable communities. There are so many benefits in switching from polluting energy and all the negative health impacts it brings, to renewable energy that eventually will cost us nothing.

Of course people like Clive Palmer and his mates disputes the science  of climate change and don’t like renewable energy, because they make money from mining coal!

But for the rest of us, it makes sense on so many levels to stop letting coal corporations decide how high our energy bills are, and get the infrastructure in place now so we can enjoy unlimited, free energy from the sun and wind forever – and solve climate change in the process. Who wouldn’t want that?

How does it feel when people call you ‘idealistic’? It’s something that is usually a compliment, but do you think it diminishes the gravity of what you are trying to accomplish?

The International Energy Agency says we’ve already used up 80% of the ‘carbon budget’ that would allow the world to stay under 2 degrees of global warming and avoid passing climatic ‘tipping points’ where the climate systems spirals out of control. They say that to avoid passing these tipping points, we need to stabilise and reduce global emissions by 2017.

Sometimes when people learn this, they look at the scale of the challenge we need to tackle and the time we have available, and say it’s impossible. But I believe we must demand the impossible to avoid the unimaginable.

I don’t care if people label me idealistic, pragmatic, or anything else! I judge the success of my work not by others’ labels, but by how effective I feel I am being in reaching large numbers of people and moving them to take action on climate change. My work is very practical and has a simple goal: trying to preserve clean air, water and soil for my generation and those to come.

During your time travelling with Nick Minchin and speaking to his ‘experts’, you remain poised even when you were clearly outraged at claims they were making. Was there ever a moment you wanted to scream?

Some of Nick’s spokespeople made claims that weren’t true, and often had a history of casting doubt on science. For example, Nick took me to meet someone in London – a blogger called Christopher Booker – who disputes the Darwinian explanation for evolution, argues that white asbestos is safe, and refutes the link between passive smoking and health problems (of course, he also refuses to accept climate science). Nick also took me to meet another blogger – involved in the US Republican party and with no qualifications in climate science – who stated that sea levels weren’t rising but rather falling.

But an hour after we met with him, I took Nick to meet the Chief Oceanographer of the US Navy, Rear Admiral David Titley. the Rear Admiral is very senior in the US military. He’d just come from a meeting with the Pentagon and he told us that he used to be a climate sceptic. But that was before was asked to lead a taskforce looking at the impact of climate change on the Navy’s operations. After looking at the data he realised that the science was in fact very clear. He told us that now, the US Navy is planning for at least 1 metre of sea level rise by the end of the century. He told us that sea levels globally are rising between 3 and 3.5 millimetres a year and are about 50% higher than they were.

A one metre sea level rise would destroy the homes of 145 million people globally. In Bangladesh alone it would affect 15 million people, and in India 7 million people.  It would destroy global GDP worth $944 billion dollars. In Australia 85% of our population lives in the coastal zone and cities like Brisbane, Perth, Sydney, Melbourne & the Gold Coast are looking at huge damage. The federal Government estimates that sea level rise will destroy or damage 240,000 buildings, and $63 billion dollars worth of infrastructure, by the end of the century. This level of harm to so many people can be hard to emotionally process.

That’s the kind of thing that made the journey so difficult at times- hearing about such serious climate change impacts from experts and then having them dismissed out of hand by people with no qualifications in science. We will never know every single thing about every single aspect of our climate system. But this doesn’t mean we can ignore the information that we do have.

Was there anything you learnt from Nick during this journey?

This experience has taught me that those of us who accept the science of climate change have to find even better ways to explain ourselves. Given a proper understanding of the indisputable scientific facts, every person should be able to support responsible action of climate change.

There has been a huge campaign against science, and it’s managed to cut through to some sections of the Australian population. If, as a result of this, the understanding of climate change isn’t strong enough, it just means people like me will have to find new ways to communicate climate science.

So environmentalists will keep working, we won’t give up, we’ll try harder, we’ll find new ways to communicate climate science if the old ones haven’t worked.

What would your top five tips for people wanting to take action on climate change in their lives?

Anna Rose is currently rounding up her tour promoting Madlands and speaking about issues concerning climate change. You can catch her at the below events:

More information on these sessions can be found here

One thought on “Interview: Anna Rose on the climate flight”