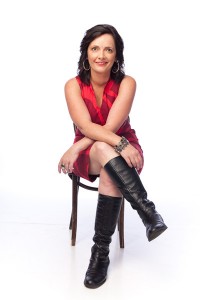 Catherine Deveny  – author, writer for the ABC’s The Drum, a former columnist for The Age, social commentator, and stand up comedian – is a woman with a lot of things to say.

She was in Sydney recently for the Sydney Writer’s Festival, where she appeared with Tara Moss, Emily Maguire, Kathy Lette and Julia Baird on a panel to discuss perceptions and ideals surrounding contemporary feminism. Deveny is perfect for such a discussion, as is evident by her creation of  ‘No Chicks, No Excuses’, a website she launched with Leslie Cannold and Jane Caro after they were concerned about the lack of female representation in public arenas. The website was designed to allow people to find intelligent, articulate women to speak at events.

According to Catherine, the reason behind the website was simple. ‘Because there weren’t enough female voices,’ she says. ‘When they say they couldn’t find any, we say “where have you looked?” and we find a place so they had no reason or excuse to say they couldn’t find any – because there’s women there really skilled, informed, and willing to speak, to write, to be interviewed, to sit on panels, to deliver speeches or MC.’

Although Deveny has spoken about a range of topics – such as child abuse in the Church, gay marriage rights, dealing with dyslexia, rights of asylum seekers and so on – her views on lack of female speakers in public forums have attracted more ‘vitriol’ than her other opinions. Why was that?

‘People don’t like the status-quo of being challenged,’ she says. ‘They’ve got a vested interest, in having a disproportional amount of middle-class, middle-age, rich, whites etc…

‘It’s no different to anything else that is considered controversial or provocative – which is [anything other] than talking about the weather really.’

Listing prominent atheists such as Richard Dawkins as one of her inspirations, an appearance at the Global Atheist Convention Melbourne in 2010, as well as a number of sell out comedy shows called God is Bullshit in 2010, Deveny is open about her atheistic views. What then, is the most common question she is asked?

Is it important then for people to open up about their personal views on their belief in God (or lackthereof)?  ‘People can do what they want,’ Catherine says. ‘And I would not be descriptive, but I couldn’t understand why people wouldn’t, and couldn’t imagine what their fear would be. I mean, how could the truth be offensive? And it’s somebody’s opinion, it’s their truth.’

Deveny additionally dismisses the notion that people are confronted by the idea of atheism. ‘They’re not,’ she says, about whether people are quick to attack the school of thought. ‘It’s only a small amount of very insecure people who want to keep believing in their imaginary friend in the sky because it makes them feel special.’

Deveny is heavily involved in charitable pursuits, among them including rights of asylum seekers and homelessness. The motivation behind such pursuits, she says, comes from her humanity.

‘Just from being a human being, and having a sense justice and compassion,’ she says about her interests in the rights of asylum seekers. ‘No personal experience, just from having a heart and a brain and a sense of justice.’

Catherine is also quick to reject the notion of asylum seekers being a divisive issue. ‘It’s not as contentious as the media makes it out to be,’ Deveny says. ‘The media makes it contentious so that they can sell newspapers and that politics can use it as a wedge in order to win votes.

‘In the community, it’s not and if you look at any of the polls and studies, people are quite happy to have … the amount we have coming in now on humanitarian visas. They just like to amplify the voice of a couple of insecure xenophobes because it makes better reading. We all love asylum seekers, let them in.’

A prolific writer, Catherine is in the process of writing her seventh book, her first novel, due out for release in November this year.

‘It’s going good… and I’m looking forward to it coming out. I’m becoming quite impatient now,’ she says.

What can we then expect from the book? ‘It’s a love story,’ she says. ‘It’s about a woman, who’s got a couple of kids and a husband… he bumps into her, unfinished business. She’s from Melbourne, he’s from London, and so it’s basically about how far you’re going to go.’

‘It’s just going to be one of those books that people will read and say “you have to read this,”’ Catherine says. ‘I think the notion of long-term monogamy is just totally and utterly unrealistic for most people and we need to find other ways. Most people are not monogamous and we need to get our head around that.’

Deveny – with book number seven on the way, her regular column commitments and talks – is dyslexic, and she’s spoken in a number of capacities about the condition and how it’s affected her, and two of her sons who also have the condition. ‘I think it has its advantages and disadvantages,’ she says about the condition, and her experience.

‘I’m sure it’s variable from person to person. I think it has mass advantages, and I’m very actively dyslexic and would choose to be… Dyslexia comes in many different forms, so that varies. I know that some people have it quite severely and are crushed by it, and other people who have been treated poorly by family, teachers, friends, and being told that they’re stupid and that they might see it as a negative. I think nothing’s black and white. I’m quite happy to have dyslexia, but I think that’s not the experience for everybody.’

Deveny, as well as her various roles, is an avid cyclist, something which she’s embraced in her home of Melbourne. How did her interest in cycling begin? ‘I cycled when I was a child,’ she says. ‘I used to work at a chemist after school and for three hours on Saturday morning, and then I kind of had a bike for a couple of years but that wasn’t a big deal when I was at uni.’

‘Then I had kids and started riding with them around on the back of the bike. I think it’s been my partner, we’ve been together for two years, and he was bringing me out of suburbs and riding to work. My ex was also a big cyclist. I actually don’t know. He was enjoying it so much, and I’ve always cycled but not as much as I do now.’

Catherine, additionally, is quick to extol the benefits of cycling. ‘We’ve saved around $140-160 a week by cycling because we don’t use public transport, we barely use the car and we don’t pay gym memberships,’ she says. ‘I think it attacks a lot of the ills of society, you know the financial pressure, depression, health problems, weight problems, and also interaction with your environment. When you ride, you really take on the whole world.’

‘Last night we went out to dinner, all of us, 25 minutes away on the bike, and we all rode. I just came back from a ride in and out of the city, and it makes you feel alive and in control, it makes you feel like you’re flying. I think that the commuter cycle revolution, particularly in Melbourne is massive. Everybody’s just riding everywhere. One of the by-products of it that really benefits is our local businesses,’ she says. ‘Because when you’re riding and you see a coffee shop or a clothes shop or a book shop, you just pull over, you don’t have to find a park. You can ride under the big trees with the beautiful autumn wind in your face, it’s magical. It’s faster than walking, cheaper than public transport or driving, and it makes you feel like you’re flying.’

Deveny, in the past, has attracted controversy on twitter, most recently in relation to Cardinal George Pell’s most recent appearance on Q&A. But, according to Catherine, it wasn’t a matter of new technology being misinterpreted. ‘I don’t see that as Twitter usage,’ she says. ‘Human nature doesn’t change, but technology does.

‘It’s just about me refusing to not bow and scrape … [to] narcissistic child abusers or child abuse enablers.’

Catherine is quick to point out that the new technology is a reflection of human nature, and not a matter of twitter being a new medium that people are beginning to understand.

‘Human nature doesn’t change,’ Deveny says. ‘It’s just about the powers that be – religion, the government, and the patriarchy have been used to be designate who was allowed to talk about what, where and how, and unfortunately that’s all been undermined with the [openness]of information and they’re furious, absolutely furious.

‘They’ve always tried to shut people down, Twitter’s no different to anything else.’

You can read Catherine’s blog here