it’s a healthy baby boy! but why were so many royal fans hoping for a girl? 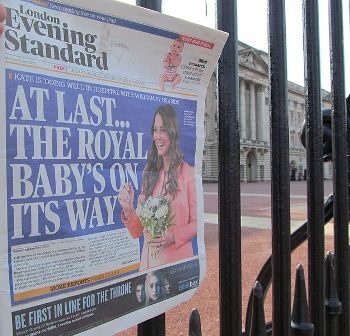 The morning of July 24, hundreds of paparazzi and thousands of fans wait outside St Mary’s Hospital in Paddington, after hearing confirmation that the Duke and Duchess of Cambridge will soon introduce their new baby to the world. At 7.15am, one of the largest doorstop press conferences in the world begins when Prince William and his wife Kate Middleton step out of the entrance to fans’ rabid cheering.

In press photos, of which I’m sure were sold for a princely sum, second-in-line to the throne William looks ever the dapper gent, while Kate is in a polka dot dress (whose designer label is quoted in several news articles), her white stilettos contrasting with the concrete steps of the hospital, and her irrationally large diamond ring visible as she clutches her child to her chest.

Within the tight white bundle images reveal one unremarkable pink baby. There’s nothing spectacular about this tiny thing – he is a small ball, conscious only of light and sound and smell, and he is ugly and squinty, as all newborns are – except he is the future king.

It all seems like a demonstration of the power of celebrity culture. And a grotesque one at that; the public’s entitlement to the royals will leave the couple without privacy, and with  condemnation of parenting and body shape, which will reportedly stimulate the economy an estimated $400 million with purchased royal memorabilia.

But the world celebrated. Landmarks such as the Niagara Falls and the Thames’ Golden Jubilee Bridge were lit up in blue, and Twitter had its busiest day ever with 487 million users online. There were 23,500 tweets per minute when the birth, and therefore the gender of the next heir, was announced.

A boy! A ‘gorgeous’, ‘absolutely beautiful’, ‘stunning’, baby boy. It’s the first time in 130 years that there are three male direct heirs to the throne. Though he does not yet know, George Alexander Louis will one day lead an outdated, colonial empire.

But it seems that popular opinion is a little disappointed. You see, many people were hoping for a girl.

This may surprise you, but first-born females have only just become legally able to rule the throne, even if a subsequent brother is born. The Succession to Crown Act 2013, which became law late-April this year, was rushed through parliament in time for the royal baby.

‘In the past, it was either a royal wife or female ruler’s responsibility to provide a male heir,’  writes Emma Mustich at the Huffington Post.

Crazy! It’s only recently become legally acceptable for a woman to rule the Commonwealth.

Yes, I know. Queen Elizabeth II has been sending out televised Christmas messages for 61 years. But in the past, women have held the throne only when there was no one else up to it.

A history lesson, if you will:

Mary I, a Tudor lady, becomes queen in the 1550s. There simply is no man around up to the job – her bloodline is pure, so she assumes the throne. After reigning by herself for one measly year, however, she marries, and her husband settles into the power seat. Technically, they have joint authority, but in general, he calls the shots.

Then there is Elizabeth I, the so-called virgin queen. After her, Mary II rules in 1689 for five years until her death – but does not wield much power when hubby is in the country. Two decades following, Ann is up to the batting plate and rules for seven years. Later, at the tender age of 18, Victoria happens upon the throne in 1837 when her uncle dies without siring any boys. Our current lady in the hot spot, Elizabeth II, takes up the job in 1952 because her parents fail to produce any sons (lazy sods!)

You see, the only time women have ruled over Britain and its associated realms have been when there are no men around. Female sovereignty was seen as second best; it only happened when, frankly, it couldn’t be avoided.

But now! Now, with the Succession to Crown Act 2013, the leadership of a woman is considered equal to that of a man. Were George Alexander Louis born Georgina Alexandra Louise, she would have reigned over Buckingham Palace even if a little brother came later.

‘From a constitutional perspective,’ writes Arianne Chernock at CNN, ‘The sex of the child no longer makes a difference.’

Back in the day of the torturous Tower of London and the Tudors, female monarchs were anomalies. Now, through the Succession Act, they are normalised.

Phwoar, about time! It’s preposterous to think this was only passed several months ago. And this was why royal fans everywhere hoped for a baby girl – because it would have been a step in cultural equality. We always need more brilliant women in leadership; to be role models, and to normalise women making decisions.

The furore surrounding the sex of the royal baby is indicative of a world just reconciling to the idea of a female leader, a world that is eager for more women in power.

2 thoughts on “it’s a healthy baby boy! but why were so many royal fans hoping for a girl?”