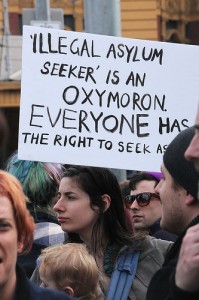 Amongst the rife and wrangle preceding the Federal election in less than two weeks, the topic of refugees, ‘boat people’ and even ‘plane people’ has never received so much public attention since the Tampa incident in the harrowing Howard era. Former arbitrary water-cooler conversations at the office are being transformed into heated debates about the Papua New Guinea solution, university student’s coffee shop banter has sizzled into a constant stream of federal policy scrutiny and baby-boomer adults, who have voted Labor for their 55 years of existence are voting Greens for the first time because of the ALP’s abhorrent and degrading refugee policy. The waters aren’t only rough for Tony Abbott’s coined term, ‘boat people’.

Yesterday I visited the Broadmeadows Detention Centre which has a capacity to hold 444 refugees; 444 mothers, fathers, young children, women in their twenties, young men in their teens. 444 people with personalities, lovers, habits and quirks. Just like you and I.

Before entering the visiting room, similar to a recreation hall, I hadn’t adorned any solid concrete expectation about the type of people I was going to meet. I knew there was going to be plenty of children, I knew there were going to be men and women. From what the media had unconsciously painted for me I thought these men, women and children were going to be different to you and I, alien to an extent. I imagined them to be scruffy, skinny and alone.

As soon as I entered the spacy grey room my previous perceptions were gregariously shredded to pieces as a bubbly four year old girl ran toward and tackled me with tickles to the ground. She was exactly the same as the children I entertain every-weekend as a kids entertainer. The only difference between her and I at this point was that I was that I wearing an orange wrist band to say that I did not live at the detention centre – I did not know she was refugee when I arrived, I thought she was a young child visiting a family member or friend just like me. She was even wearing a beautiful purple headband and purple tights, just like me.

The centre (or the room that I occupied) seemed basic, well maintained and clean from what I could see.  Much like a community hall or a big conference room, groups of people sat around talking, the children played and old women gossiped.

And it was at this point it became uncomfortably obvious that these aren’t just refugees, ‘economic migrants’ or the faceless men and women who hop on planes, boats, space crafts etc. to come to Australia. These are regular people, who look just like you and I. They have personalities and Facebook; I know it seems incredibly naive of me to think that people being held in detention wouldn’t have Facebook but I told three of my friends about their social media presence and they were amazed and surprised. Even the most socially progressive and open minded young Australian’s have had their perceptions of refugees painted for them in the form of a helpless deaf/blind/dumb child who has no concept of the world or technology around them. I feel ashamed and embarrassed of my former, underlying misconception of these people – these are people who may be educated, people who have witnessed genocide, murder and rape. People with smiles, wrinkles, pimples, dimples and cowlicks in their hair. Just like you and I.

From a glance or picture, one would assess the people in the visiting room to be happy, energetic and of reasonable health. But glances and pictures don’t tell the story of the twenty-two year old Iranian woman who was released three weeks ago and met her partner in the detention centre. Unfortunately, her boyfriend has been in the centre for over 2 years, does not know when he is going to be granted refugee status, and now despite being released she regularly returns to the detention centre to spend time with him. She told me she is finding it difficult living in the community, she is finding it hard to make friends. This woman is one year older than me and looks like someone I go to university with. Her familiarity is terrifying. Pictures and glances do not tell the story of the Tamil refugee, who I shared salt and vinegar chips with yesterday, who has been classed as a security threat by ASIO. His detention is indefinite at this stage – he has been in detention for over four years. That’s four years of birthdays, arduous 9-5 work, travel, TV shows and family gatherings that he has been denied. This man, who I crunched on salt and vinegar chips with, makes jokes, wears glasses, and like you and I, is not a threat to our national security.

Australians love to throw around misguided statistics or Tony Abbott and Kevin Rudd quotes to prove a point that people seeking asylum are trying to take our jobs or want to become dole bludgers. We dehumanise the issue by using words like ‘economic migrant’ and are genuinely surprised to find out that some refugees lead an existence before they came to Australia and their country was ravaged and slaughtered by conflict. I cannot provide a simple solution to the disgusting breaches of human rights that are occurring every day in detention centres across Australia and our neighbouring countries. But I can ask you to consider and remember that we’re not just dealing with ‘boat people’ or ‘plane people’ – we are dealing with real life humans whose existence and quality of life shouldn’t be determined by the number you put on preference paper come election day. These people are more than tax-payers money; they are humans with stories, lovers, hobbies and passions. Just like you and I.