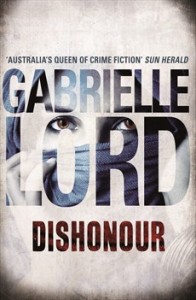 Detective-Inspector Debra Hawkins is a steely, no-nonsense cop in Gabrielle Lord’s sixteenth crime novel. Debra is the head of new taskforce, RED-V, which targets domestic violence in middle-eastern communities. ‘Over the last few years,’ she informs her team, ‘We’ve discovered around one thousand incidents of forced marriages and attempted forced marriages here in Australia.’

As well as tackling Sydney’s jihadist-connected drug lords, Debra’s family life is pretty messy. Her junkie brother is back on the scene; her distant, aging mother has had a bad fall; and lately she’s been receiving anonymous emails about her father’s murder, a mystery that has haunted her since his death when she was 12.

RED-V’s first rescue mission is Rana al-Sheikly, a nineteen-year-old Iraqi woman imprisoned by her criminal brothers. She is barely allowed out of the house to attend university, and they want her to marry an older cousin. The novel’s pace quickens, and Lord’s story bristles with stress and suspense.

The author is ‘Australia’s first lady of crime’ with sixteen titles under her belt. Dishonour sits neatly within the crime thriller genre, posing a complex web of questions: Who really killed her father? Can she save women oppressed by Muslim men? Will her family ever be peaceful? Will her arch nemesis finally get his revenge?

The leading lady is based on the real life Debra Wallace, head of the Middle Eastern Organised Crime Squad in Sydney. As is usual within this genre, she is guided by a strong sense of justice. This can feel like a cardboard cut-out, her character a righteous, untiring investigator with no moral flaws: ‘I knew that managing this team and assisting the people we were sworn to protect would be a challenge, but I was ready for it.’ And the dialogue delivers plenty of police cliches: ‘”Okay,” I said, making a note of his last known address. “Let’s pay him a visit. Check on his bail conditions. We’ve got to get him off the streets.”’

This novel has its merits: fast-paced crime with a satisfyingly Australian setting. But Lord is yet another Australian voice who projects a sense of ‘otherness’ when writing about our Muslim brothers and sisters.

This is despite Debra identifying with Rana al-Sheikly: ‘Although I didn’t have her graciousness, I felt we had other, crucial qualities in common.’ It is also despite efforts to acknowledge the culpability of Western religious institutions: ‘I drove off thinking about how it had taken women in our society many centuries to finally free themselves from the oppression of the Church and the patriarchy but that even know there were times when I felt its weight.’ Statements like these feel as if the comparison to Christianity’s sins have hastily been tucked in after the completion of novel to soften the Islamophobic blow.

Even with these admissions, the novel purports a white saviour complex. ‘I was suddenly charged with anger. “Why don’t we just kick their door in and arrest them for deprivation of liberty? This is Australia, not some hellhole in Pakistan!”’

In an interview with the Sydney Morning Herald, Lord expresses her desire for justice. “’I wasn’t aware of how timely it would be when writing it but I was very concerned by the plight of women in certain ethnic groups,’ says Lord, cradling a cup of hot chocolate at a favourite beach cafe. ‘Then I heard about women, Australian citizens, living in fear. I got the same sense of anger when I wrote Fortress and Whipping Boy, which are about people who don’t have a voice.’”

Yes, there are oppressed women in these communities. Forced marriage is a reality in Australia, one that has been imported from outdated practices by immigrants, some from the Middle East, some from Africa. But the assumption that the solution exists without including the Muslim community and inclusive structural change is arrogant, and champions the rescuer.

Lord interviewed migrant women ‘who had fled domestic violence or oppression ‘ in her research for the novel. It’s clear that she is driven by a strong sense of morality, but one of the reasons why oppressed women are ‘people who don’t have a voice’, is because other people speak for them. Privileged white women, in fact.

‘The reason why minorities are oppressed is because people of power have simplified these groups for the dominant culture,’ said Lebanese-Australian writer, Michael Mohammed Ahmad earlier this year at a writers’ festival. The author is the director of Sweatshop: Western Sydney Literacy Movement. He continues: ‘There’s a romantic idea that writers have that you can empower people by representation. Unfortunately this is not true. It’s an industrial complex. You must be giving the community the tools to do it themselves.’

But Lord doesn’t do this. In her novel, Muslims are victims or bad guys; the rescuers either white or Christians. There is one exception: Maryam, the force’s multicultural officer who wears a headscarf. But the rest of Lord’s Muslim characters are either villains or scared into submission. Debra’s arch nemesis, Adam Massoud, is ‘by far the most evil man I’d encountered’; ‘he’d been arrested many times, charged often, and had three convictions for grievous bodily harm and other violent assaults by the time he was twenty. He was also a devotee of al-Qaeda.’

Mention al-Qaeda and you’ve got a certified bad guy. He probably would behead her if he had the chance, amirite? Like in so much other mainstream media, in Dishonour Muslims are either terrorists (men) or oppressed victims (women), completely forgetting that many are our neighbours and friends, many of which were born in Australia. Lord reportedly ‘had her book vetted by a scholar of Islam’, and while some may compare that statement to the censorial fatwa against Salman Rushdie, this is really a community rejecting the author’s reductionist representation.

Lord’s realism paints a one-sided story. In a xenophobic political climate which already demonises people of the Islamic faith, Dishonour continues that damaging narrative. Any work of fiction that serves to reinforce the simplistic and superior notions that Muslim women are victims with great strength of spirit, and that Muslim men are aggressive monsters, caters to the divisive notion of ‘the other’.