lip lit: half the world in winter 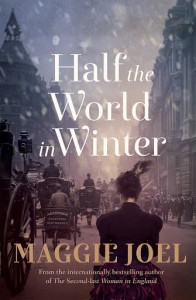 Death comes to us all; only the fortunate are allowed to grieve.

Half the World in Winter is Maggie Joel’s second novel, which centres around the domestic life of a middle-class family in Victorian London. The patriarch of the family is Lucas Jarmyn, the only son and heir of a railway entrepreneur. When we meet the Jarmyn family, nine-year-old Sophia has been dead six months, and the parents continue to grapple with their grief.

And now – another death! A railway accident kills two railway employees and a passenger, another nine-year-old called Alice, who was travelling in the third class carriage with her father, Thomas Brinklow. While mourning, he begins looking for answers and someone to blame, and travels to London seeking justice. Half the World in Winter illustrates how society deals differently with these two deaths.

The most universal human experience is death; we all experience it. However, as Half the World in Winter demonstrates, while death might be universal, the grieving process isn’t always.

In Victorian England, death was an obsession and an industry. Enormous department stores devoted to all things funereal were commonplace; people’s lives were preoccupied with the rituals and the paraphernalia surrounding death. To avoid scandal, a person was required follow rules regarding what to wear, the right note paper, and drawn curtains.

The rich Jarmyn family observes the appropriate mourning social mores. They also have time  to grieve. Because six months have passed, the family shift out of ‘first mourning’ (wearing black outside the house) to a clothing restriction to a lighter emotional palette of lavender and grey. The ladies of house are allowed to ‘call’ on people again, and to resume their previous social engagements.

The Brinklow scenario is quite different. Alice’s funeral is a simple service attended by her father, a few people from the village and two men from the railway company. When the service is finished, the grave digger removes the box she was buried in, covers her with a light layer of soil, and leaves the hole open for the next burial.

This novel illustrates the expectation that the working class grieve less; their lives have less value. Thomas loses his job because he took a day off to attend the funeral and a second day for the inquest into the accident.

For both families, women are excluded from the funeral services. Even the mothers of the children aren’t permitted to grieve publicly; they are expected to sit at home, like the children, and wait for their husband and other adult male relatives to return.

The Jarmyn household staff serve as an interesting juxtaposition to the family. We discover that they all have their own tragedies, but because they are working women they must continue nonetheless. If they don’t work, they cannot feed their remaining children. The cook, while making disparaging comments about the fuss made, states in passing that she has buried a number of children, many so young she has ‘forgotten their names’.

In contrast to working mothers, wealthy women were free to wallow in their grief, locked away from the world, while their husbands saw to the dreadful business of running the family. Queen Victoria was famous for mourning Prince Albert for many years. She hid herself, refusing to attend to any but the most urgent matters of state, leaving the running of the country entirely up to the parliament. Even by the standards of the day her prolonged mourning was seen as excessive, but it would have set the tone for the country’s habits.

Joel’s writing is engrossing. Her research and attention to detail about the domestic life of Victorian England is fascinating, while the trials and petty dramas of the Jarmyn family keep you turning the pages to find out more. As well as a curious study of grief between the classes, this is a wonderful piece of fiction that will satisfy any history buff.