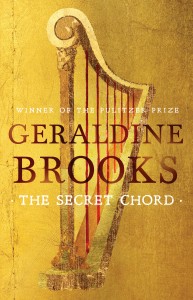 Geraldine Brooks is a genius.

Historical biographical fiction is difficult to write at the best of times because of issues with source evidence and conflicting views; Brooks does a superlative job in her latest novel, The Secret Chord, taking inspiration from a historical figure from three thousand years ago.

King David’s story of rags to riches to divine punishment as a result of an abuse of power is a compelling one in itself. But when told with Brooks’ beautifully crafted sentences and original approach to a three thousand year-old story, the result is an extraordinary exploration of timeless themes and motifs.

There is never any doubt that the story of David as a fascinating, debated and entirely unique historical character is the mainstay of Brooks’ new novel. And smaller stories are recounted within this greater one; some are familiar tales from Old Testament readings, like David and Goliath, or the story of Bathsheba (referred to as Batsheva in the novel). Others have been meticulously created by combining historical research with a talented re-imagining, which is the hallmark of Brooks’ previous novels, including People of the Book and the Pulitzer Prize-winning March.

For the first half of the novel, at David’s command his advisor and friend Natan retraces the king’s past by interviewing his mother, one of his brothers and his first wife. Here, we come to know David and his rise to power through many lenses. Brooks thoughtfully gives voice to characters whose perspectives are missing from biblical and historical recounts. The latter part of the novel has a more linear timeline and traces David’s life from his killing of Batsheva’s husband and his punishment as a result of this.

Various ideas flow through The Secret Chord: corruption and violence, love and loyalty. But these all stem of the central theme of King David’s story—power. How power is determined, fought for, maintained and lost. The power of a king over his people, or of men over women. The power of David’s music to bring a kingdom to a standstill with his voice and his harp.

The novel is the fruit of extensive research—a detailed afterword of secondary sources is provided— and Brooks intelligently explores the troublesome nature of truth in historical sources by designating Natan as the novel’s narrator, rather than David himself.

Natan’s primary concern is that David’s story be recorded, since he believes that the king’s story is unique and essential. The Prologue makes this clear: ‘Words. Words upon the wind. What will endure, perhaps, is what I have written. If so, it is enough.’

Readers are well aware of Natan’s own friendship with the king and how this probably affects the reliability of his story. But Brooks cleverly challenges accepted versions of certain stories through Natan’s discussions with others in painting an accurate portrait of David, particularly in the early years before he knew the king.

The easily identified tale of David and Goliath is recounted with a touch of cynicism by one of David’s brothers: ‘ “Every time I hear it, the Plishtim champion has grown a cubit in height and my heroic little brother has lost a year in age.” ’ This decision to recount David’s tale through the eyes of another lends itself to interesting characterisation techniques and development, and as a result, family and kinship ties—or betrayals thereof—form the basis for much of the action of the plot.

At times, it is difficult to ascertain whether readers are supposed to like or dislike David as a character. This discord is shrewdly constructed through Natan’s own reflections upon the behaviour and decisions of the king from both political and moral standpoints. But David’s singing is consistently unique and consistently a source of joy for all who hear it. ‘It is hard to describe a sound without likening it to another sound, and yet the timbre of David’s voice was a thing apart… I find myself turning to other senses – sight and touch. The fall of fine silk through the hand; the rich warmth of enveloping fur.’

The social standing and power of women in Israel in 1000BC is an issue that Brooks carefully portrays, through historical creativity steeped in fact. David’s having eight wives, mostly simultaneously, is seen as entirely expected for the time and part of a king’s role in ensuring political alliances and positive foreign relations with neighbouring tribes and regions. Interestingly however, Mikhal, David’s first wife and daughter of the previous king Shaul, is given a surprisingly powerful voice in the novel. This is also the case for Batsheva, who gives birth to David’s successor on the throne, Shlomo – better known from Biblical stories as Solomon.

Brooks’ extraordinary talent for storytelling results in a version of David’s story that is a compelling piece of literary historical biographical fiction, finely wrought and sensitively sculpted. She strikes a perfect balance between pace and depth of description and characterisation, resulting in a novel that is suspenseful even though the outcome of the story is largely already known. And Natan’s voice, as the narrator but not as the protagonist, is highly convincing and is effectively used to drive this story of one of history’s most interesting figures from the Iron Age.

‘And there is one chord, one perfect assembly of notes that no other hand can play.’ The exceptional nature of David’s secret chord echoes his own uniqueness as an historical figure. And one whose story as a king, a brother, a father, a son, a warrior, a lover, a husband, is still, after all this time, a story worthy of retelling.

The Secret Chord by Geraldine Brooks