lip-readings : the need for resolution on same-sex marriage 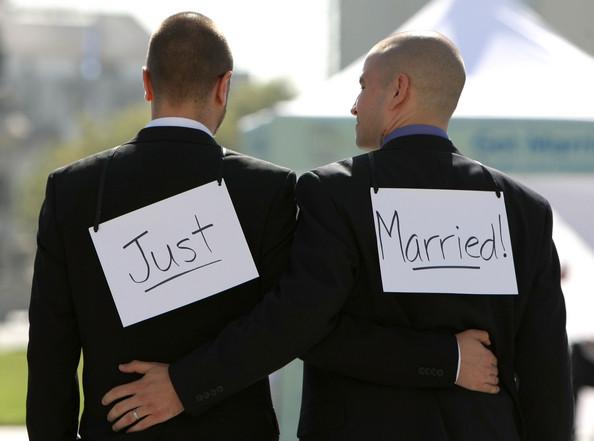 At our recent Lip-readings event in Canberra on January 24, Celebrant and writer Judy Aulich gave the following speech. Judy married 11 same-sex couples during the five-days in which it was legal in the ACT. Her talk was moving and powerful, and we’re excited to share it with you here.

During New Year I was staying at the coast with friends and we were invited to one of their neighbours for drinks, which is where I met Richard.  Richard was 83 although he could easily have passed for 10 years younger and in the space of fifteen minutes I learnt quite a lot about him.

He lived on a large property near Young which had been in his family for generations and had now proudly passed the property on to his two sons. He also had a daughter and when I asked him what she did he answered by telling me who she had married and what her husband did.  Richard had been married for many years and his wife was not with him that evening as she was not well, having suffered from bi-polar for 30 years, during which time he had cared for her.

He was intrigued as most people are when I told him I was a marriage celebrant. He wanted to know if I had had anything to do with the recent marriages for gay people. Briefly I told him. Then he said, I know a gay person, he’s the son of a lovely chap, a nearby farmer. And you know, his boy is a nice person.  He has a partner and he seems a nice person and do you know what they did, they went to America and got married. They actually got married. Why would they have done that?  And then they went back to America and this is even more astounding, they now have twin boys. Isn’t the world strange?  What do you call them, you can’t call them parents, can you?

Well, Richard, I said, you do call them fathers, these little twins just have two fathers. And yes sometimes the world does seem strange and different but that isn’t always a bad thing. But why would they want to get married, he said, it doesn’t make any sense to me.

Richard seemed to me to be a decent man, just quite bewildered by these strange times.  So Richard, [I asked] when did you decide to be straight?

He looked a bit like any man who had always lived on a property at Young and is 83 might look when a woman he has only just met asks him this. Well, I continued, you’ve been married a long time so I assume you are heterosexual. When did you decide to be?  I didn’t, he said, I was born that way.

Richard, that is exactly like it is for people in same sex relationships. They didn’t decide, they were born that way. And they feel all the same emotions that you feel to your wife who you have cared for over 30 years, and for the children you have.  They want to be able to be married to the person they love just as you wanted to and many want to have children, just as you did.

Richard looked genuinely perplexed and then he said, is that how it is for them? I never knew. Yep, I said, just like you and me.

Much as I warmed to Richard and his tiny bit of new insight, cricket was being talked next to me and I took the opportunity to leave him to join the serious folk, the men.

It’s easy for us in Canberra to forget that people like Richard exist. He wasn’t homophobic, he was just bewildered by what was happening around him, having grown up in a community where homosexuality was hidden and not acknowledged. Most families if they looked back a bit would have a spinster Aunt Maud, who never married, an Uncle Clem, a confirmed bachelor, mine was an Aunty Nell, who lived with her friend Della.

And now, within Richard’s lifetime, we have an ACT government with a strong commitment to legislating for same sex marriage. It is a big leap for him from Aunt Maud and Uncle Clem to this.

I conduct many marriages every year and they are happy occasions. But the 11 same sex marriages I conducted in the five-day window of opportunity before the High Court finding were overwhelmingly full of joy and emotion.

So why did it matter so much to them? Many had been in a long term relationship, their commitment to each other could not be any stronger.  They had completed wills and made arrangements. Why couldn’t they be satisfied, as Julia Gillard claims to be, in a loving relationship without the legalities of marriage. The difference is that she has a choice.

I am very conscious that I am talking about a group of people of whom I am not a part and in preparation for this evening I spoke again to some of the couples I married during that five days.  Their sense of being marginalised from the mainstream came out strongly and not just in this very obvious way of being unable to marry the person they want to spend the rest of their life with.

How does this marginalisation manifest itself in a community like Canberra that I think would pride itself on its inclusivity?  One woman mentioned what she called the ‘heteronormality’ of our society, the constant expectation that your partner is of the opposite gender and how she has to always weigh up if it is an appropriate time to say that her partner is female. She pointed out that whilst her children had grown up in a family with her partner’s children, those children were not recognised as being part of the same family, they were not brother and sisters, they were not stepsiblings.   There was no way to describe their relationship.

Another couple mentioned that even after 20 years together, their marriage enabled them to gain insight about the deep significance of marriage and the extent to which they had, without realising it, not treated their relationship as being of equal worth as a married one.  They realised that they have not expected their respective families to treat their partners as true and equal members of their respective families. Marriage is not just about two people and their relationship; it is about their families as well.

It was so important to them that they are recognised as part of each others’ families. They wanted assurance that if one of them passed away the other would always continue to be recognised as a grandparent, as she had rejoiced in the lives of these little children since their birth and having grandchildren was a blessing and joy she never imagined as part of her life growing up, knowing she would not give birth to children.

And as they were getting older, another factor was that the status and symbolism of marriage conveys a message that is just not replicated by any other currently available document or agreement.  Despite wills and enduring powers of attorney and the like, those documents are not equally recognised by all states and territories. So if they were to have an accident in Queensland and one person requires emergency care, there is no guarantee that the other will be recognised as a partner with the power to make decisions.

And yes, it was for many a political statement. They wanted to let their family, their friends, the community and also the government know how important is for them to have the same rights as others.

The ACT Government has had a long commitment to this, with the Civil Partnership Act in 2008, the Civil Union Act in 2012 and then the Marriage Equality (Same Sex) Act 2013. It stood for five days during which time 31 couples married and five days later those 31 marriages were declared null and void.

There was profound sadness at the High Court that day. But the findings determined that whilst the ACT legislation was not consistent with the federal Marriage Act 1961, it would not be unconstitutional for the federal government to legislate to include same sex marriages. The path is clear for such laws to be passed.  But the likelihood of that happening in the life of the current government is extremely low. It reminds me of the oft-quoted hair commercial, ‘it will happen but it won’t happen over night’.

How will it bring resolution to the sense of marginalisation same sex people feel?  It won’t stop homophobia overnight.  It will bewilder people like Richard, and not all couples in a same sex relationship will choose to marry. But a marriage ceremony is legitimising ritual that gives public and legal status to a relationship.  It is a rite of passage that the majority of people expect to engage in at least once, sometimes more, in their life-time.

As Simon Corbell said to me after one of the ceremonies I conducted, it struck me watching this ceremony how very normal it is to get married.  It’s hard to feel marginalised when you are being normal. Couples said to me how open they felt they could be that weekend, walking along the street holding hands, telling restaurants they had just got married, and getting good wishes from strangers.

But in an ideal world it should not be remarkable, just another couple going about their business. That is when there would be real resolution.

One thought on “lip-readings : the need for resolution on same-sex marriage”