mastermind behind FEMEN revealed to be a man 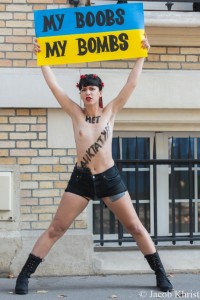 Now, I’ll be honest. I was always a FEMEN-naysayer. I found their protest methods bizarre from the beginning, and couldn’t shake the feeling that just ‘raising awareness’ of issues through the use of bare breasts and sensationalist news stories isn’t entirely effective when it comes to the broader feminist movement.

I have had many an argument with friends about this, and have heard all possible arguments for and against FEMEN. I felt uncomfortable about my own distaste for the bare-breasts protest method, because as a feminist, I think that women should feel empowered by their bodies, and should feel comfortable naked, and should de-sexualise breasts and normalise the female body.

But for some reason, from the first time I saw FEMEN in the news, I couldn’t shake the feeling that this wasn’t ‘empowerment’, the way I always envisioned it. In fact, it felt strangely like the opposite – I look at the images on their website and see primarily young, white, slim women; I read news stories that focus on the bare breasts, but rarely on the actual issue at hand; and perhaps most troubling, I began to find it harder and harder to discern what exactly the issue was that was at hand.

The text on the FEMEN website is largely nonsensical (have a read, you might disagree), and some of their positions on women from Muslim backgrounds are downright imperialistic. Although their stunts have received a lot of media attention, and potentially raised the profile of particular issues affecting women, most of the media I have seen has focussed on FEMEN itself – not whatever they are fighting for.

I appreciate that my reading of FEMEN is probably somewhat harsh – and I’m certain many will disagree with me. But recent revelations that the mastermind behind FEMEN is in fact a man, seem to somewhat validate my unease around the movement.

In a new documentary entitled Ukraine is not a Brothel, directed by Australian film-maker Kitty Green, the founder of FEMEN is revealed to be Victor Svyatski, a man who has been described as an ‘advisor’ to FEMEN, but who in fact runs the movement from behind the scenes.

When I first heard about this, my immediate feeling was dismay. As much as I held my own suspicions about FEMEN, I didn’t want those suspicions to be true. I would have much preferred to be wrong, and to have this movement actually be a collective of strong, active women, aggressively fighting for their rights.

Instead, it really is just a movement by a man, for the male gaze – topless women, protesting and simultaneously providing stimulus to a public hungry for sexualised content. Feminism would probably be a lot more popular as a movement if all feminists were bare-breasted and conventionally attractive, I guess.

That said, I think it would be a mistake to not acknowledge the agency of the women involved in FEMEN. They are individuals, who have made the decision to join this movement because they feel strongly about the causes that FEMEN fight for. I don’t think it’s right to claim that they were all entirely manipulated by Svyatski (although I maintain that their protest method is deeply flawed).

However, based on Svyatski’s comments, it’s difficult to see the women of FEMEN as entirely in control of their methods, choices, or causes.

In the documentary, Ukraine is not a Brothel, Green interviews Svyatski. He says, “These girls are weak. They don’t have the strength of character. They don’t even have the desire to be strong. Instead, they show submissiveness, spinelessness, lack of punctuality, and many other factors which prevent them from becoming political activists. These are qualities which it was essential to teach them.”

The patronising tone in these comments, and the later admission from Svyatski that he might have, subconsciously, started FEMEN to ‘get girls’, does lend some credence to the view that FEMEN is in fact almost a male construction of feminism – a type of feminism where only ‘beautiful’ women are involved, and they spend a large amount of time shirtless.

What do you think? Is FEMEN still a feminist movement? Are you disappointed  or does this not change anything? Does it matter who started it?

2 thoughts on “mastermind behind FEMEN revealed to be a man”