memoir: who me? a feminist? 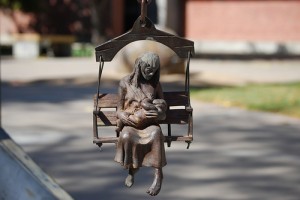 I have never called myself a feminist. Being raised by a single mother in the 1980s with my sisters, equality for women wasn’t a concept that I questioned. You could say I took it for granted that women had equal rights. At this early age I didn’t question gender equality because I was only influenced by my mum who worked full-time and still cared for a family. It was the norm.

The concept of feminism was introduced to me in my high school years in the 1990s. Attending an all-girls private school, this was a popular topic in our social studies and history lessons. During this time though, feminism to me was defined by the purple and green ‘women can do anything’ stickers which we plastered on the bottom of our school bags as the epitome of cool. My main associations with feminism were no bras and picketing – of which I did neither. So I wasn’t a feminist, right?  I associated the ‘women can do anything’ slogan with women running a marathon or applying for higher level jobs, but failed to link it to simple situations such as acknowledgment by a member of the opposite sex.

Approximately 18 months ago a holiday changed my view. I travelled to Dubai with my husband and two sons, who at the time were two years old and six months old. Prior to leaving, I was apprehensive. While I had travelled overseas before, going to a Muslim country made me a little more nervous. It wasn’t just the dress code but mainly the fact I was still breastfeeding my six-month-old baby. Advice from a family member who had been there before was to avoid breastfeeding in public. In recent times in Australia, we’ve still seen the primitive view that it is offensive to breastfeed in public, most recently by a male morning show host. So I knew that it would be unacceptable in Dubai. I researched what was acceptable dress as the only female in our party. I was conscious of being respectful and dressing appropriately. I also didn’t want to end up in jail for indecent exposure.

On arrival at the airport, my husband passed over all the passports and travel documents to the customs officer and I stood meekly aside. On one taxi ride from the large shopping mall, I sat in the back seat like a quiet mouse while the driver would not talk to me at all; he would only speak to my husband. On the contrary, while in tourist areas such as the hotel, the male staff were jovial and very helpful. In the souk, the male staff member grabbed my blue-eyed, blond-haired baby, joking he would keep him.

What I wasn’t prepared for was an environment very different to what I am used to, where my husband had to do the majority of communication for me. While Dubai is modern compared to other parts of the United Arab Emirates, I definitely felt the impact of the culture change from my hometown in Australia, where I manage all our bank accounts, travel arrangements and generally most things associated with our day-to-day life.

While these situations made me feel uncomfortable, I wasn’t really ready for what I would encounter as a breastfeeding mother. Since I knew not to breastfeed in public, I assumed there would be sufficient areas that I could use to lock myself away to breastfeed out of sight of the groups of men that were routinely seen.

On a trip to the local beach park we saw tourists swimming and sunbaking in their bikinis and board shorts. I still felt too uncomfortable to breastfeed in public even in this environment. I had no choice but to stand in a toilet cubicle attempting to breastfeed my son. After a very uncomfortable twenty minutes in the heat of the day, I came out of the cubicle to a large line of women waiting for the toilet. I avoided eye contact as I left so I didn’t catch the glares coming my way.

I started to feel more comfortable when I found some parents’ rooms in the shopping centres. It was like an affirmation that it was okay to breastfeed my son. The second room I visited did not have a closed room but a chair in the corner. Unashamedly, I pulled the wrap over my shoulder so I was covered and began feeding. A group of young local women came in with a baby. At first, I wasn’t bothered by this. This was usual practice in Australia and as long as you were covered up, no one appeared to be uncomfortable. But it didn’t take long for them to start looking at me and speaking with each other in another language. I began to doubt myself based on my previous experiences. Maybe I shouldn’t even be feeding in here. But then again maybe they were admiring my little blond-haired boy, which is unusual for that part of the world. Without being able to communicate, I won’t really ever know.

These experiences made me realise not only of the equal opportunities available at home but also how strongly I did, in fact, feel about feminism. After the trip I recognised that not only am I a strong woman but I now consider myself a feminist. It made me realise that I do have the beliefs and principles of a feminist and therefore, I am happy to call myself one. Something as simple as gender equality I take for granted in Australia and while we still have a long way to go, I cannot believe how much I took our opportunities for granted. It only took me more than three decades… Signing off, Kym Campradt. Mother. Wife. Feminist.

One thought on “memoir: who me? a feminist?”