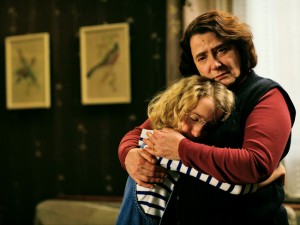 Only a few weeks ago myself and a elderly couple devoured a heart-wrenching French film, The Hedgehog, inspired by the best-selling novel The Elegance of A Hedgehog – an insightful yet saddening story about the contrast between a child’s and a older woman’s perspectives on life.

The first shot introduces us to Paloma Josse (Garance Le Guillermic), an eleven year old girl who has made the choice to end her life once she reaches her twelfth birthday. Her character is quite intuitive, and the unusual idea of someone so young accepting death willingly is depressing but an also engaging aspect for viewers. This film approaches the depression at a different angle, exploring the deeper meaning of being unhappy.

“Planning to die doesn’t mean I let myself go like a rotten vegetable. What matters isn’t the fact of dying or when you die. It’s what you’re doing at that precise moment”, says Paloma to us as she films the last few months of her life with her father’s old camcorder. What this pessimistic girl observes is documented through filming her family and her surroundings, allowing us to see that she knows more about people than they know about themselves.

Living amidst a rich family and rich neighbours in a apartment building, Paloma believes that everyone is living in a ‘fishbowl’, leading to her choice to die as a way of escaping. The building’s concierge Renée Michel (Josiane Balasko) often referred to, as the ‘janitor’ is a major character that the storyline focuses on. It is confusing at first, it appears that the film revolves around the young girl but in fact it begins to show more of whom this sullen old woman is and her purpose.

The actors have done justice to their characters, bringing them to life in both appearance and personality. If Paloma didn’t look noticeably different with her mop of dishevelled blond curls and rounded glasses, in comparison to stereotypical French girls her own age there would be nothing interesting for the character to build from. Another aspect of the characters is Renée’s appearance where clearly she isn’t considered the beautiful swan but the ugly duckling. Together they challenge our expectations of stereotypes, and they draw in attention because we are left to interpret who the characters truly are.

“Happy families are alike, unhappy families all have their own reason for being unhappy” quotes Renée and the mysterious wealthy Japanese foreigner, Mr Kakuro Ozu, played by Togo Igawa (known for his role in Memoirs Of Geisha). The various references to literature, in particular the novel Anna Karenina, brings the film into the perspective of Renée and how she hides behind her world of books. She is more entertained by the fictional characters than real people. Throughout the entire film this is a very relatable factor for the audience to engage with, as it triggers a sense of familiarity of when we too have retreated into the fantasy of what books can give us.

Furthermore, the literature serves as a metaphor for expecting the unexpected. Mr Kakuro Ozu enters the lives of Renée and Paloma to open a door to a whole new world. These different individuals embark on a beautiful friendship and perhaps a romance could be found amongst them but that’s for you to decide. I personally found there might have been something more.

“Mrs Michel reminds me of a hedgehog. She’s prickly on the outside but I feel that inside, she’s refined as the falsely lethargic, staunchly private and terribly elegant creature.” These thoughts of a child define the idea often found in great films that appearances can be and often are utterly deceiving. Eventually another winning point to the story is the young pessimistic girl regaining a sort of aspiration to continue to live and fight against becoming trapped in the ‘fishbowl’.

As I mentioned The Hedgehog still remains a sad tale as Renée’s life takes a turn for the worse, despite having finally learnt to love and be loved by kindred spirits Paloma and Mr Kazurko Ozu. With an ending that should remain unspoiled, I can assure you this film will stay with you long after the credits play out with the gorgeous French soundtrack. From watching such an emotive film, you should expect tears and deep philosophical conversations to follow.