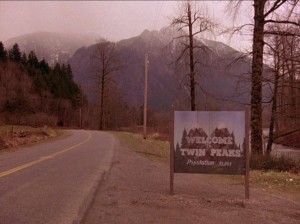 A missing girl; an out of town detective; a small town creaking under the weight of massive, terrible secrets.

There’s much common ground shared by Twin Peaks and Top of the Lake. Both shows are indisputably great; the popular jury is still out to some degree on the newly-minted Top of the Lake, but Twin Peaks is one of the all time heavyweight television champions, that rare decades-old beast that is still addicting fresh viewers every day. But beyond the superficial similarities of plot and setting, there is a deeper connection between these two shows: they are about the nature of evil. And yet, though they are digging around in similar thematic territory, each opens a different psychological wound, offering separate explanations for their horrific stories.

The most interesting parallel between these shows is their birthing by auters who come from long cinematic backgrounds. Not in the passing way that Scorsese or Spielberg’s names are attached to Boardwalk Empire or Band of Brothers, but as an important part in their bodies of work. When reeling off a list of David Lynch’s most important productions, Twin Peaks is one of the first to come to mind, and soon the same will be true of Jane Campion and the burning, immaculately-made Top of the Lake. The strong individual voices of their creators is the lifeblood of these two shows, making them clearly distinct from one another.

David Lynch has always lurked in the shadows of the human psyche, dwelling amongst dreams and the absurd, gleefuly blurring reality and disorientating his audience. Twin Peaks treads similar on ground as his masterpiece Blue Velvet, peeling back America’s suburban veneer to discover depravity and moral degradation amongst well-kept lawns and frontages. Every townsperson in Twin Peaks has something to hide, with the show’s daytime soap-opera plots slowly giving way to a fevered delirium of absurdity. Though rooted in very real tragedy via the grief of Laura Palmer’s mother, the show’s ridiculous tangents (for example one of the characters being turned into a doorknob) keep it from really being about individual emotion. Instead, Lynch weaves bits and pieces of characters’ emotional arcs into a broader fabric, forging an uncertain atmosphere that is more about the mood (the big Twin Peaks buzzword) of the town and its people as a whole. Evil appears not within characters, but as an external force in the form of the demon Bob (yeah). Lynch seems unwilling to condemn us, or at least absolves us of our worst actions by claiming that there are forces within us, beyond our control, that will one way or another bring darkness into our lives; it isn’t our own doing, it’s just the way of the world.

Jane Campion, however, believes in the existence of conscious and casual evil. She finds it in the relationships between men and women. Her films—The Piano, as an example of damaging heterosexuality, Bright Star as one of healing—are equally as concerned with relationships and gender relations. Campion’s focus is simultaneously narrower and more universal than Lynch’s. His canvas is broader, but explores a distinctly American, post-Reagan-era concept of fear and evil. Her lens focuses more specifically on the connections between men and women, but the themes that spin off from that are more universal (Top of the Lake‘s massively diverse cast of characters speaks to this). Amongst the brutality that men exercise towards women, the sexual violence and physical intimidation, Campion also finds tenderness and the beautifully fragile intimacy of heterosexual relationships; her awful men can be tamed by women, though it is the impermanent domestication of a beast that constantly carries a threat of sudden savagery. The violent and active grief of the missing girl’s father provides an interesting counterpoint to the overwrought, debilitating grief of Mrs. Palmer in Twin Peaks—he is also the best example of evil in Campion’s world: callousness. Lovelessness. And here I think she discovers something more universal than Lynch’s small-town American evil.

It is perhaps unfair to compare these shows. Twin Peaks functions in a serial-style, week-to-week network television fashion, and often meanders into narrative dead-ends or just wallows in Lynchian weirdness. Top of the Lake, however, is part of the network boom that has seen huge amounts of money thrown at TV, and has a direct, lean, storytelling style that makes it suitable to watch in one big chunk, as indeed it was initially screened at Sundance this year. However, both are immensely satisfying experiences, and thankfully not without their fair share of humour and levity; within darkness, both Lynch and Campion can always find the light.