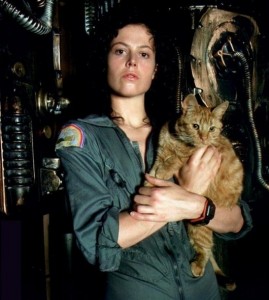 The first movie in the Alien franchise; of the same name, was released in 1979, and set the bar for sci-fi and horror in the years to come with its original plot, strong characters and atmospheric filming. I can only assume you have a broad understanding of the plot of the film; seven employees of a big mining company are flying back to Earth, transporting ore.  They are woken from hyper sleep to respond to a signal beaming from a nearby planet as part of their standing orders from the company they work for. What they find instead is Alien, a face hugging phallic representation with acid for blood and a tendency to hide out in ventilation shafts.

When the writer Dan O’Bannan and Ronald Shusett, who co-created the story with O’Bannan, conceived of the idea for Alien, they specifically wrote all of the characters to be unisex, allowing the director and producer to interpret their gender as they saw fit. When casting the film director Ridley Scott focused on strong actors, who could hold their own and allow him to focus on film’s style, and he got this in spades with actors including John Hurt (Kane, the executive officer), Tom Skerritt (Captain Dallas) and Ian Holm (Ash, science officer).

The real hero of the movie though is Sigourney Weaver’s character; Ellen Ripley.  What is truly interesting about this character are all the things she is not. She is not young (Weaver was 29 when Alien was filmed) nor is she portrayed as sexy. She is not helpless, yet she is also not a superwoman.  She does not meet the alien head on; guns blazing.  She is terrified, and that terror helps her to survive. She is smart, driven, and tough, and Weaver, whom no one could describe as a pushover, plays her perfectly. Interestingly (given the time it was written) you never feel Ellen Ripley is a woman, struggling in a man’s world to make her mark. She belongs there, as much as any of the other male characters. It is such a simple device but one that completely alters the tone of the film.

The sets are fantastic, and really reflect the working class nature of the characters.  These are not intrepid explorers, this is not Star Trek. They are blue collar workers, doing a job, for which they expect to be well paid. To add to the feeling of these people being just your “average Joe” the script is very conversational in style, with a lot of emphasis on the camaraderie between the characters, which only emphasises the horror when it all starts to go wrong.

All talk of reproductive imagery aside, what I find so wonderful about this film, and what sets it apart (for me) from most standard horror flicks, is that it isn’t about shock value (the normal go to for most modern horror films) – it is about suspense, and implication. The Alien is rarely shown in full, more often only parts of it were shown (and in one case, it only appears as a blip on a character’s radar).  There is also a feeling of invasion; this creature came into their ship, their home. They are months away from Earth, from anyone who can help them or save them.  There is also a more insidious element of fear, in the form of the company they work for, Weyland-Yutani, and their true motives for sending them down to investigate the signal.

In short, there is a reason this film is considered a classic.  It is well written, well acted, original, beautifully filmed and to top it off had a female lead whose strength would be enough to sustain the Alien film franchise for 3 subsequent films.