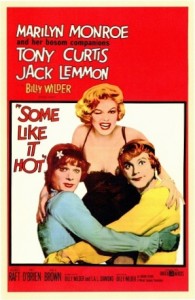 Some Like It Hot (1959) is now seen as one of the greatest comedies in filmic history. It’s a wonder though why it isn’t seen as one of the most ahead of its time. Gender and sexuality are core themes explored in this screwball comedy with great quality and wit by the wonderful scriptwriter and director Billy Wilder.

So, that was my super professional way of saying OHMYGODILOVETHISMOVIE!

Some Like It Hot stars: Jack Lemmon as Jerry and Tony Curtis as Joe, as two musicians who, after witnessing a murder by the mafia, are on the run from the mob and disguise themselves as women in order to hide. They join the Society Syncopators, an all-girl band, where they both fall head over heels for the va-va-voom Marilyn Monroe as Sugar.

This is my favourite classic movie because it’s so easily re-watchable (my own count being six times in two years). I find it to be so delightful because much of the humour is an intelligent comment on the gender roles in Western society, and on the bodily restrictions and oppressions women face. It hasn’t aged and certainly I think some of the jokes and scenes will still shock some viewers.

Lemmon and Curtis really shine as the stars. They deliver the quick wit with ease and playing up the situational humour to a tee. While Jack Lemmon’s character is somewhat outrageously sexist with lines like “Will you look at that! Look how she moves! It’s like Jell-O on springs. Must have some sort of built-in motor or something. I tell you, it’s a whole different sex!“, the joke ends up being on him as he is relentlessly pursued by aging billionaire Osgood.

The film was one of many featured in the great documentary The Celluloid Closet, about queer characters in cinema, with Tony Curtis being interviewed. Much of the doco details the Hayes Production Code which meant that gender and sexuality themes, issues and differences in movies had be expressed subtley or in a nuanced fashion so that the film could be distributed due to the conservative dogma enforcing this legislation. Some Like It Hot didn’t get the production code approval. With its progressive script, it’s sad and easy to see why.

While homosexuality isn’t necessary commended in the film, it has visibility and transforms into a running joke…that sort of turns out not to be a joke…between Jerry/Daphne and Osgood. It’s allowed because it’s humorous – but the queerness of the film doesn’t always end up becoming the butt of the jokes. In fact, it’s the heterocentric male leads adjusting to the cruel man’s world while trying to run from the mafia that provide most of the laughs.  I don’t want to reveal the best example of this – which happens to be the film’s final lines – but let’s just say you get the idea that the rigid lines of sexuality as seen by the Production Code back then become all squiggly…and awesome.

Joe/Josephine: But, you’re not a girl! You’re a guy, and, why would a guy wanna marry a guy?

Not only do we see the men struggle to make it as women when men are hitting on them all the time when they don’t like it, we see the main female star Monroe being both sexualised (as one might unfortunately expect from such a “sex icon”) and sexual. Sugar is a carefree spirit who has a history of drinking and sleeping with the wrong sorts of men. And she’s isn’t punished for it! Yep, you’re not misreading this. Some Like It Hot is a 1950’s movie of gender AWESOMENESS.

I’d like to finish this review by sharing favorite joke from the movie which makes me laugh a little too hard every. single. time.

Joe/Josephine: It sure is. I had two ponies drown under me.

I hope you have loads of laughs watching Some Like It Hot – and be sure to check out The Celluloid Closet too!