should men be included in feminism? 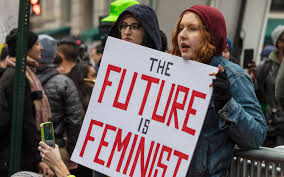 Feminism is defined as “the belief that men and women should have equal rights and opportunities”. The broad spectrum of feminist ideologies (from radical, Marxist to liberal) have different expressions of this core belief, but they are all fighting to create an egalitarian society. Many branches of feminism also place emphasis on intersectionality, which considers how the patriarchy affects all intersections of society and the ways that multiple identities affect gender-based discrimination. Although contemporary feminism is increasingly embracing inclusiveness, there are arguments that men should be completely excluded from the movement in fear that they will dominate or overtake it.

It is important to point out that the feminist movement is not anti-men, it is anti-oppression. The key of gendered oppression is the patriarchy, which is entrenched from birth to disempower both genders. From the moment we are born, boys are indoctrinated into the rules of patriarchy and girls are carved to be submissive and inferior. While patriarchy oppresses women and places men in a position of superiority, it still perpetuates rigid identities and creates negative consequences for both genders.

The patriarchy is so tightly ingrained that many people – both female and male – are blind to it. The biggest way that most people are aware of gendered inequalities is through it’s more violent expressions. One example of this that domestic violence and sexual assault is disproportionately perpetrated by men, and one in five women experience sexual violence. On the flip side, when men are survivors of abuse or assault, it is much more difficult for them to speak up and access resources.

There are also smaller, more subtle expressions that serve to keep our gendered norms in check: clothing differences, gendered baby toys (e.g. barbies vs. firetrucks), girls being taught to be gentle and speak quietly, boys being taught to repress their emotions, catcalling and other forms of normalised harassment, women in positions of power having to prove themselves, women being called “sluts” or “frigid” to control their sexuality, men being criticised for “acting like a girl” or “being a pussy” to control their masculinity. The list goes on – simply think about any form of social differences between men and women, then question why they exist. These social differences, which we perceive as natural, are used to maintain the patriarchy and the status quo.

For men, gendered norms and oppression are also upheld through toxic masculinity. This is the idea that traditional norms of masculinity result in “harm to men, those close to them and the world we live in.” The socialisation of boys normalises violence and fosters domination, objectification of women and homophobia. These ideologies promote emotional repression and shame for showing any “feminine” characteristics. The adherence to these traditionally masculine norms promotes violent behaviours, including domestic violence and sexual assault. As a result, the concept of toxic masculinity is interwoven with female oppression. This means that although feminists are focusing on the inequalities facing women, we are simultaneously trying to disempower the same constructs that negatively affect men.

Despite the negative consequences of toxic masculinity, the patriarchy still puts cisgender men in a place of privilege. For this reason, it is impossible to deconstruct the patriarchy without many men feeling uncomfortable. It is a difficult task to check your own privilege and become aware that your normalised actions could be contributing to inequalities. It is much simpler to dismiss feminists as “man-haters” or “feminazis” than to think about your own actions that might perpetuate the experiences women speak about. In the same vein, it is easy to be sceptical when men do call themselves feminists, because this is also commonly used to stop critically reflecting on their own behaviour. The discomfort of cisgender men and other more serious consequences (such as the ramifications caused by the #metoo movement) is required for any tangible and long-lasting change in social attitudes. The reluctance of many men in understanding why these actions are necessary and overdue hinders cultural norms from truly transforming.

In turn, this reluctance has created a defensiveness in many feminist circles towards even engaging with cisgender men on topics of feminism. We are at a point where women can speak louder than ever before, and that makes it even more important that we retain an open dialogue with men who are on the side of gender equality. It takes time to understand the extent that patriarchy is ingrained and its negative consequences, no matter what your gender is. The point of the movement is to change societal norms, and a major way of doing that is by having men incorporate feminist practice in everyday life and unlearning harmful patriarchal ideas. If men are alienated from the feminist movement, it will only be harder to change the social and cultural norms that uphold the patriarchy.

2 thoughts on “should men be included in feminism?”