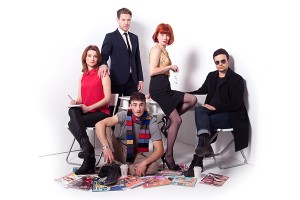 ‘NSFW’ (Not Safe For Work) is Melbourne’s Red Stitch Actors Theatre’s final production for 2013. Written by UK playwright Lucy Kirkwood and directed by Tanya Dickson, NSFW is an exposé of the media world that doesn’t quite manage to deliver on its edgy name, but is touching and incisive in parts.

The play takes place over two acts- the first is set at Doghouse: a humorous pun on Penthouse magazine. The second act is set at Electra: Cosmo with a Freudian twist to the name. Both acts follow hapless but well-meaning intern Sam, who gets fired from Doghouse for accidentally publishing a pin-up of a fourteen-year-old girl and subsequently has a desperate internal battle when asked to publish misogynistic content in his job interview at Electra. Along the way we meet Charlotte – a closet feminist at Doghouse who is brilliant but down on her luck; Richard – a grating Eton trust-fund baby with no morals or drive; Angus – the dodgy Doghouse boss with a sensitive heart; Mr Bradshaw – the broken father of said fourteen year old pin-up and Miranda – the sassy ‘devil-in-Prada’ editor of Electra.

In the writing and staging of this play, Kirkwood, Dickson and the Red Stitch Actors Theatre are asking the audience to question our passivity as media consumers and also to put a human face on said media. To understand the people who produce it. The distraught father, the compromised feminist, the skeezy Penthouse boss – are they as complicit as one would assume? Or are they victims of economic circumstance? In this way, the play is more about class, and the relentless tug of capitalism, than it is about feminism. Kirkwood asks us not to be too quick to dismiss the motives of men who seem to be oppressing women- they too have ideals, they too must compromise. As lead actress, Kasia Kaczmarek, tells me in an interview- “She [Kirkwood] shows how much…the patriarchal structure affects men as well as women.” Besides, as the editor of Electra shows us, women are just as capable of misogyny as men.

The complicated relationship between ethics, feminism and media is a promising one, but I’m not sure if the play delivers. The feminist content is frustrating at best, clichéd at worst. I suppose this is a given considering the play’s subject matter. There is very little to say about women and raunch culture that hasn’t already been said – and said loudly- by two very prolific generations of feminists (NSFW only premiered last year, by the way). Tanya Dickson asserts that “Lucy [Kirkwood] looks at humour to interpret difficult questions which I would hope people would then ponder further”, however  I saw nothing new or challenging in the revelation that depictions of women could be manipulated and compromised by those with money.

Dickson tells me “NSFW looks at women’s roles in our objectification… I’m really interested in the notion of internalised misogyny.” The internalized misogyny Dickson is referring to is displayed in NSFW by the behavior of Miranda, however, is it really a surprising observation that the female editor of a woman’s magazine could participate in chauvinism? I personally found it upsetting that it was even considered a point of discussion. Everyone knows that women are capable of consuming all the bile forced down our throats. We don’t need people to stick up for the men anymore. We need the same superannuation as men. We need women like Jill Meagher to stop disappearing. We need the debate to move past toddler rhetoric of who-caused-it.

Irritatingly, the anti-misogynist and all-round-nice-guy Sam provided the feminist-counterpoint of the play. In the first act, Sam refuses to write about his love life for Doghouse and in the second he has a crisis of conscience when asked to publish the “flaws” of female superstars. Sam is a likeable, but clichéd character. The idea that the ethical heart of the play is a well-intentioned nice-guy made me bored. I don’t go to the theatre to get an 80-minute vindication of Nice Guys of OkCupid. Can we stop vindicating men? They do it all the time, in the rest of the media.

What did move me in NSFW was the depiction of class. A post-GFC play about class and the publishing industry could easily have turned into yet another regurgitation of Lena Duhman’s Girls, or another uncomfortable two hours of “contemporary” Brecht. However, the actors pulled their punches and delivered unpredictable moments of empathy. For myself – a recent Fine Arts Graduate and unpaid-professional-extraordinaire – the plight of intern Sam and compromised-feminist-Charlotte  cut close to the bone. Sam can’t afford to work for free anymore: “you’re not hungry enough” Electra editor Miranda retorts without skipping a beat. Charlotte (well played by Kasia Kaczmarek)  is too embarrassed to tell the members of her women’s group about her job at Doghouse, but does not want to leave: “all of my friends are on the dole”, she tells her boss. It seemed very fitting that I volunteered to review this play because it was the only way I could afford to take my girlfriend on a date to somewhere that wasn’t Food Not Bombs. I saw myself in the compromise and contradiction of those characters and their lives. While the reflection wasn’t pretty, as a member of a generation of graduates entering into a job market decimated by the poor choices of their predecessors, the validation is welcome.

Should you go see NSFW? Probably-there’s some very good performances. If you’ve ever gone deeper into feminism than the first lecture of gender studies 101 there are parts that you will find frustrating and dull, but there is a pathos in the character arcs: a rawness to the relentless squeeze of contemporary life that is nuanced and poignant. For myself, at least, it is comforting to know that others are also bailing slower than the boat can sink.

NSFW is showing until Saturday 21 December.