VGen, positive health, and the importance of aid 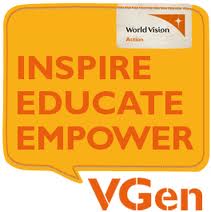 After having developed an interest in the social bases of global gender inequality and differences in men and women’s health, I spent a considerable amount of time studying relevant academic theories and views. But aside from doing research and developing my own understanding, I didn’t think that there was anything an individual like me could do. It was at that point that I came across VGen, the World Vision Australia’s youth movement. I’m so glad I did, because VGen helped me realise that health starts with the empowerment of women, and perhaps more importantly, that it starts with individuals like me and you.

On societies day at University ‘O’ Week this year, I had a chat to Bec Prior, the Tasmanian University Team Leader of Vision Generation (VGen) Tasmania. She told me that VGen aims to inspire, educate and empower young people to act on social justice issues like world poverty. They made me see that as an individual young person, there was in fact a lot that I could do. On that day I joined, and a few weeks later Bec appointed me a leader too. She told me I had potential, and she made me feel capable of acting on my world views.

Specifically, Bec told me that coming into the election year it was important to promote the “See the Bigger Picture” campaign (World Vision Australia 2013). Emphasizing the importance of tackling the primary causes of inequality, the campaign focuses on the promotion of Overseas-Aid and aims to educate people on what the giving of Aid can do. After doing some reading, I realized that this campaign was aligned pretty closely with my own beliefs and values. It tackles the root of health inequality, and highlights the relevance of gendered health too.

Through their promotion of the World Vision Child and Maternal health initiative, for example, VGen aims to educate the community about the positive effects that the implementation of primary health infrastructures can have and in fact, do have. Globally, 7.6 million children die from preventable causes of illness by the age of five, and almost 99 percent of these are in developing countries where people don’t have access to the same primary health care resources as people like me and you (World Vision Australia, 2010). In these countries, access to clean water, good nutrition and trained hospital staff are three of the biggest issues. Without access to these necessities, hundreds of thousands of women die during pregnancy or childbirth, and as a consequence, their children are ten times more likely to die by the age of five too.

In more developed countries like Australia, the same patterns do not exist. Why? Because our health system provides us with trained midwives and primary health initiatives like immunisation programs and supports the basic right of access to clean water and nutritious food. Women have access to the resources they need to limit their suffering in childbirth and pregnancy, and ongoing health care is available, from which children benefit too.

Statistics show that if these same initiatives were better supported in developing countries, women and children would not suffer the same hardships that they now do. In 1990 the number of child deaths before they reach five was 12 million and now is down to less than 7 million and maternal deaths have declined by 47 percent over the same period (World Vision Australia 2013). Good health infrastructure assures people have a positive start to life, and is fundamental to lifting communities out of poverty too. Unfortunately, due to pressures on developing countries, it is programs funded by Overseas Aid that primarily supports our world’s poor. It is here I want to emphasize therefore, some specific things that you can do; spread understanding in your community about the importance of Aid, and encourage our government to do this too!

Individually it may seem like there is perhaps little that any one of us can do, but as Bec emphasized to me, we all have the capacity to inspire a larger group. While one voice perhaps can’t make a difference to the poverty in the world, a collective million voices certainly can do! When millions of people start to emphasize the importance of supporting primary health initiatives which can reap benefits to women and children overseas, and which here, already do, the benefits of Aid will no longer be possible for politicians to delay or ignore.

So if you’re an individual that wants to promote positive health, or that cares about the inequality of the poor, please believe me when I say that there is a lot you can do. If you need more convincing, or even want to have a dig at my unconventional style of rhyming, please contact me at [email protected] or look for yourself at worldvision.com.au. After encountering more of our “See The Bigger Picture” campaign, I’m sure you will see like I did too, that inequality is not inevitable. The solution starts with helping women, and that starts here, with you.

‘Poverty is not natural. It is man-made and it can be overcome and eradicated by the actions of human beings. Sometimes it falls on a generation to be great. YOU can be that great generation.’ – Nelson Mandela

VGen is World Vision Australia’s Youth Movement. It is a global organisation that aims to inspire young people to speak out and take action against world poverty. If you would like more information or are interested in getting involved visit their website or their  Facebook at www.facebook.com/VgenAustralia