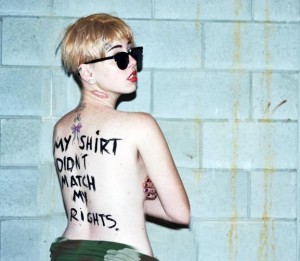 In the latest display of equal rights activism, women in the UK, Canada and just a little closer to home in Brisbane have taken to the streets in topless campaigns, each for various reasons, but each losing an item of clothing that only becomes an issue when a woman isn’t wearing it.

The annual event Go Topless, which began in 2007, encourages public rallies where women ditch bras (and some men don them) to fight for gender equality issues across the US and Canada.

‘As long as men are allowed to be topless in public, women should have the same constitutional right. Or else, men should have to wear something to hide their chests,’ says founder of Go Topless, Rael.

Inspired by the work of Go Topless, Boston-based woman Stacey began to work with start-up group, Topless Equality, taking the issue further than a yearly event and into the everyday hypocrisy of shirtless rights. 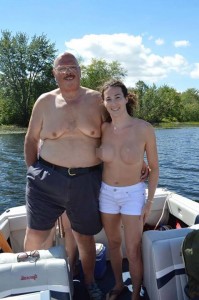 “Another example of the extreme inequality of chests. His breasts can be shown off all the time, but mine have to be covered. Its discrimination, pure and simple.”

From dog walking, and gardening to driving around and chillin’ in the park, her topless campaign seeks for acceptance of the same rights for women as there are for men and to end the discrimination. She is now the Massachusetts spokesmodel for the group.

But the motives of Brisbane artist, gay rights activist and self dubbed ‘smart arse’, Illma Gore were slightly different.

With the words ‘my shirt didn’t match my rights’ written on her bare back, Illma braved the winter chill and rode a council funded city-cycle push bike through the sunshine state’s CBD in protest to Opposition Leader Tony Abbott’s comment, ‘I am not somebody who wishes to see radical change made on the fashion of the moment.’

Announcing her plans to bare her breasts on Facebook, Illma wrote: ‘For a radical statement, I give you a radical response. Today, as an artist and as a homosexual, I will skate through Brisbane topless and well, I guess today my shirt didn’t match my rights.’

‘I wanted to convey a message that revealed its ignorance,’ she said.

‘What baffles me is how a human any one human but especially one who wishes to lead our country to speak for the people can refer to a large part of our nations rights as a ‘fashion’’.

‘We are not statistics we are human beings.’

Update: An earlier version of this article stated that Stacey was the founder of ‘Go Topless’. This was inaccurate; Stacey is the Massachusetts spokes model. The article has been amended to reflect this.