women in careers: genevieve the artist 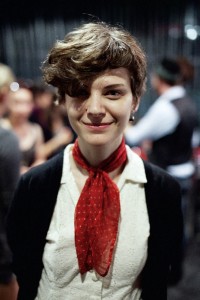 Meet Genevieve, an emerging artist currently primarily dabbling in documentary and portraiture photography, filmmaking and painting pictured here at the Premiere of her film The Three Minute Project, shot by Christopher Arblaster.

Her journey to becoming an artist came as an unexpected wave of abstract creativity inspired by Jackson Pollock, as opposed to her original plans of a career in Japanese language. After graduating high school in 2010, Genevieve began to use photography and film to document the music and arts scenes of Adelaide, as well as the passionate individuals that made it all happen.

Genevieve is inspired by the music of Lou Reed, the photography of Billy Name, and the art, philosophy and times of Andy Warhol and the 1960s Silver Factory. These artists sparked her passion for documenting the creativity of people, musicians, artists, gigs and art events.

‘Just as the 1960s Pop Art era lives on in their legacies, so too do I want to capture history for future generations,’ Genevieve says. ‘I hesitate to say I outwardly chose my path – many things fell in the right place at the right time and thus I have ended up on the path I’m on now.’

What did you do to get there?
First and foremost, I just started. When I first saw the paintings of Jackson Pollock, I thought, that’s interesting, I’d love to try that technique – and I did.

When I got the urge to ‘borrow’ my friend’s family’s disposable camera to shoot one of the first gigs I ever went to, I indulged that urge, and thus began my photography career. When I had the idea of filming every person I knew in undirected screen tests, despite knowing nothing about film, I simply asked two friends to help me out and a week later The Three Minute Project had begun. I actively sought out, followed up and saw right through to the end all the opportunities I could. It was, and still is, exhausting, stressful and endlessly tiring – but at the age of 19 I have an internship, commissions, exhibitions, publications, reviews, interviews, and a feature length film to my name, and that is worth every bit of it.

What are the pros to your work?
I’m doing what I love and what I’m truly passionate about – art, photography, portraiture, documentation, creativity, people, and artists – despite barely having a free moment I adore every minute of it! I’m meeting creative, brilliant people, collaborating with them and having fun all the while. I’m also actively creating my own career and path, and that is the most satisfying thing of all – I can say I am where I am because I’ve made it all happen for myself.

What are the cons to your work?
Sometimes I fear that I’m not going to make it; that I’m just one artist of millions, that I have nothing important to share with the world, and that I might as well retire to a 9-to-5 job and leave art, photography and creativity behind… But I quickly dismiss that. One thing that is a pain though is how difficult it is to gain any kind of significant income from my artwork. Not having financial stability will probably become more disconcerting as I get older, so I plan to find some sort of arts-related job that I enjoy, that I can be creative in and that I can live off. For all I know this could be a professional photography practice, but it could also mean dabbling in all kinds of arts-related fields – as long as it involves creativity, both on my part and on [the part of] others, I’m more than happy!

Usually all it takes is a conversation, a suggestion, a question; a text, an email, a Facebook message, a phone call. And you’ll never know what could happen if you never try.

One thought on “women in careers: genevieve the artist”