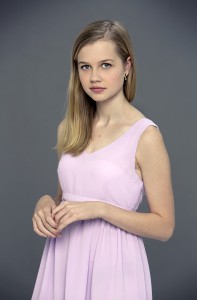 Angourie Rice is a young Australian actress known for her roles in These Final Hours and The Nice Guys. Lip’s Sarah Randall recently spoke to Angourie about her experiences in the industry and her role in the film adaptation of Jasper Jones.

What drew you to Jasper Jones and the character of Eliza, specifically?

I was really excited to be involved in this project, because I really liked how it talked about issues and things that were relevant to today. I wanted to tell a story that was Australian and that I thought needed to be told. I liked the character of Eliza because she wasn’t just a love interest, she’s a very interesting and complex character and she’s really important to the story.

How has working in the screen industry from such a young age influenced both you as a person and your relationship with your peers?

Oh, that’s a really good question (laughs). I think growing up in this industry I have had to mature a lot; I have always worked with adults and have been surrounded by adults, so I think I’ve learnt a lot from them. How has it influenced being with my peers? Well, I guess every time I meet someone new, they don’t know about me acting, and to me and to my close friends, it’s kind of normal – I mean, it’s a crazy thing, but they know about it and it’s kind of normal to them now. When I meet someone new, there’s always a strange moment of it coming up in conversation, or me telling them or them finding out themselves, and it does make me realise that I have a very strange hobby (laughs). It’s a hobby that not many people get the opportunity to have, so I think I’m very lucky in that way.

There are always difficulties that come along with acting. Going away for long periods of time definitely affects my social life with my friends back at home, and there have been times where it’s been really difficult coming back from filming, coming back to school and everything’s changed. So, it definitely is difficult at times, but I think I’m really lucky to have these opportunities and I wouldn’t change it for anything.

That’s great! What are your thoughts on the current state of gender equality within the Australian film industry?

That is a fantastic question, and I love it!  I think we need to tell more stories about women, Australia is particularly poor in [terms of] stories told by women. It’s really important that everyone is represented in the entertainment industry – it’s a reflection of our culture and our society, and women are half the population. I think every single woman should feel represented and equal in society. I’m a feminist, and I’m proud to say that I’m one, and I think it’s really, really important for every woman’s story to be told,  including women of colour and women with disabilities, and women within the LGBTQ community. I think it’s so important and I really hope that I can make a difference and make a change in the industry.

I’m very inspired by Emma Watson, from the answer I just gave you, obviously! I think what she’s doing is fantastic, she’s a great role model for young women. Also Rowan Blanchard, who is my age, maybe even a year younger; she’s also doing fantastic things. She is a great advocate and I really respect them both. I think one of the things I really respect about Emma Watson is that she managed to finish her education and go to university while she did a multi-million dollar franchise. I think that is outstanding and I really admire her for that.

Is there anyone in the industry you would particularly love to work with?

Well, Sofia Coppola was the one on my list and now I’ve done that, so I’m so happy! I’d definitely like to work with more female directors; I’ve only worked with two so far, so I’d love to do that. I’d love to work with Emma Stone, I think she’s fantastic.

What is your advice for aspiring actors/actresses?

My advice is probably don’t get too caught up in it. It’s not really the be-all and end-all. That is easy for me to say because I’ve had a lot of luck, and luck is definitely a huge part of it. There are probably people out there who are so talented and even more talented than I am, and it all comes down to luck and opportunity and being in the right place at the right time. I think it’s a mixture of luck and hard work and if you really love it then just go for it, and if you feel uneasy at any point then don’t feel like you have to do anything to change or to get roles because, in the end, I feel like it’s not going to be worth it.

What are your plans for the future?

I would like to finish school – I’m currently in Year 11, and I’d like to finish at my high school. I did contemplate doing VCE over three years; it’s still something that I’m thinking about, but at the moment, I really want to graduate with all my friends so I’m just going to tackle it and see how I go (laughs).  I’d love to work more; I’m still auditioning for things, and there are projects sort of floating around. I think this industry is always changing and if I’m lucky enough to get to work in it for a longer time then I’d love to.  I’m just taking it as it comes, I guess.

Definitely, that’s something I’m really interested in. I think being in the public eye means you have a voice and I would love for my voice to be heard. I would love to look into that, and be an advocate, and I think what [Emma Watson is] doing is really important. We need more role models like her, and more people to stand up for what they believe is right. I think yes, that is definitely something I’d love to do in the future.

Excellent! Well, thank you so much.

Thank you for giving me the opportunity to talk about things I’m passionate about!

Jasper Jones is in cinemas now.