women in film: stranger with my face international film festival 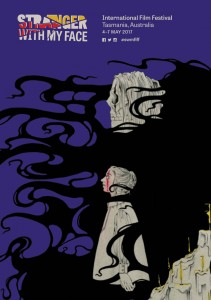 Filmmaker Briony Kidd shied away from the camera at film school. She knew she could write and edit, but wasn’t so sure on the filming front: better to leave that to the experts. It wasn’t until later that Kidd realised none of her fellow students had been experts either. Others – namely, the guys – in her course were just less worried about messing up along the way.

Now established as a writer and director, Kidd wants to encourage other young women in the industry to give things a try, and support their efforts in an industry where they face many structural barriers. As a co-founder and director of the Stranger With My Face International Film Festival, she is certainly doing her bit to create change.

We meet at one of Hobart’s cosy wine bars to talk about this year’s festival and the place of women in the industry. As Kidd points out, women are consistently underrepresented at the coal face of decision making in film: they are less likely to be directors, cinematographers, and those who are given the big dollars to make films. The SWMF festival, about to take place for the fifth time, is in some ways a response to this inequality: the festival is dedicated to showcasing and nurturing women filmmakers in genre film, particularly horror.

What began as an idea for a film night during Women in Horror Month has well and truly surpassed the initial vision of Kidd and co-founder Rebecca Thomson. This year’s SWMF program includes the Tasmanian premiere of Roxanne Benjamin’s horror anthology XX, a retrospective on New Zealand filmmaker Gaylene Preston (Perfect Strangers, Mr Wrong), and a screening of Wes Craven’s The People Under The Stairs followed by a Q&A with its cinematographer Sandi Sissel.

The festival also has a strong focus on mentoring, with the return of ‘Attic Lab’, an invitation-only workshop where female filmmakers will get the chance learn from seasoned professionals. In April, SWMF also co-sponsored the ‘Tasploitation’ challenge, where filmmakers of any experience level are invited to write, shoot and edit a horror film in just 48 hours. These aspects of the festival are hugely important for its director.

While horror films might not be everyone’s cup of tea, Kidd is keen to challenge stereotypes about the genre and question its boundaries at the same time. ‘I’m really aware now that genre definitions are political,’ she says.

‘When you have a lot of women directors making films and you find over and over again that they’re talked about as being interesting films, worthwhile films, good films – but it’s not really horror – you start to think hang on, what’s going on here? Who’s making these decisions about what a horror film is and why do women’s films seem to not quite make it into that category?’

She cites the so-called “Masters of Horror” – directors like Craven, for example – and ponders why women directors don’t seem be given entry to this group. ‘It’s partly to do with power structures and women getting opportunities to direct full stop,’ she explains. ‘But it’s also to do with these rigid definitions where a certain type of person is considered to be a horror director, a certain type of material is considered to be a horror film, and other things that are related but don’t fit those rigid definitions just don’t get accepted,’ she says.

This year’s festival is challenging some of those definitions with its retrospectives. ‘It’s very important to not only celebrate what’s coming through that’s new and interesting, but also to look back on what has happened in the past that hasn’t been fully considered or celebrated,’ says Kidd.

The festival’s politics go beyond the film industry and debates about genre. Kidd argues that events like SWMF are particularly important at this juncture in world politics, where women’s rights are being challenged around the world.

‘Film has an incredibly important role in political discourse and advancing the cause of oppressed people,’ she says. ‘Because film communicates on the level of emotion, you can actually create empathy for the characters… by the end of that film [the audience] can’t look at those kind of people again and say I don’t understand them.’

Kidd herself is currently working on a film that will challenge preconceptions about older women. Deliciously described as a ‘post-apocalyptic psycho-biddy thriller’, she and Tasmanian producer Catherine Pettman received a grant from Screen Australia’s Gender Matters fund for the film’s development.

‘[Older women are] a really huge audience and also really underserved and treated with disdain a lot of the time,’ she says. ‘Apart from the story itself, that’s what making us so passionate about this project and why we think it’s got potential and hopefully will happen.’

In the meantime, perhaps this year’s SWMF will help facilitate change in the industry, encouraging young women to get involved ­and be part of a cultural shift. Kidd is adamant that the real problem is not women’s confidence or ability – it’s the structure of the industry itself.

‘What we have to do is collectively say we don’t like this system,’ she says. ‘It’s not helpful for the quality of films, it’s not helpful for culture, it’s certainly not equitable, so we need to smash [it] up and see what else can happen.’

The 5th Stranger With My Face International Film Festival runs from 4 – 7 May in Hobart. A full program and ticket sales are available here.