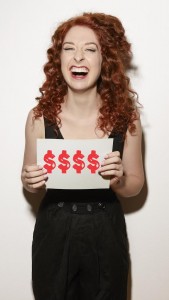 Can you make a feature film with $50,000 dollars? Australian filmmaker Sophie Mathisen (Drama) is certain that you can. This is the idea behind the inaugural Big Pineapple Film Competition, launched in February this year by the For Film’s Sake Festival and Women in Film and Television .

Mathisen, who is director of both organisations, says the competition’s quirky name is about having a bit of fun and not taking things too seriously. ‘It’s just me being a bit cute, really. It’s the trucker terminology for a $50 note, but it’s a bigger version.’

With the competition currently accepting one page submissions, the winner will receive $50,000 to make their feature, as well as the support of the FFS festival and its partners for post-production, marketing, and distribution. In this way, the prize is worth much more than the initial ‘Big Pineapple’.

To make matter even more exciting, the competition is designed to combat gender inequality in the film industry. Entrants must pass a ‘Four Tick Test’ in order to be eligible: in other words, women must be in four of five roles in the filmmaking team:  writer, producer, director, cinematographer, lead protagonist. In keeping with the competition’s emphasis on filmmakers who are just starting out, there can be a maximum of just two feature credits between the four creative leads.

Mathisen says the Big Pineapple competition is about encouraging people who have a great idea for a feature film, but lack the credits needed to make that happen – bypassing what she calls the ‘catch 22’ of needing experience to get experience.

‘Before I made my feature, I had made no shorts, I’d gone to drama school, on paper [it] was like “who is this lunatic, why would you ever give her any money to make a feature?”’ she says. ‘But I knew that the story was good, I knew that I could get some great actors involved, I knew that I could shoot it in Paris and make it look great.’

Mathisen is hoping others will see that a great film can be made on a budget. ‘As emerging filmmakers, we thought about what we would have wanted when we were thinking about first works,’ she explains.

The competition’s organisers also are hoping this opportunity will also encourage male filmmakers to work with a female crew. ‘The way that we really wanted to pitch this was to be not only encouraging female teams to come up with ideas, but also to incentivising male graduates from film schools or make emerging filmmakers to be thinking “hey, rather than shooting with my mate, if I bring together a female crew, I’m going to have a pretty good shot of making a damn good first feature as well”,’ she says.

‘It’s very much about shifting the conversation from the worthiness of female crew to the skill of female crew. I think that comes through active employment opportunities rather than just mentorships.’

So why is Mathisen so passionate about the cause of gender equality in the film industry? She explains that her own experience of making a feature film, while great, was was littered with obstacles, and she wants to invest time in changing the industry culture.

‘I think it’s one of those things of seeing that if you are just looking after yourself it’s going to be a very empty victory, because at the top of the tree, you’re still only one of very few women,’ she explains. ‘I would like to be in a culture and a film community that is full of women like me. I don’t want to feel isolated, because I know that there’s a huge amount of talent out there that just needs a little bit of a leg up.’

To make this culture shift happen, Women in Film and Television has set a bold target for 2021, when they hope to have progressed the aims of their organisation ‘to the point where WIFT can graciously and thankfully self-destruct’. What would that look like, I wonder?

This, of course, would allow women in the industry more time to get on with the work they are passionate about: filmmaking. ‘We are all emerging filmmakers who’ve taken on an organisation like this, [but] we want that to be a stop-gap measure, we don’t want that to be our life’s work, because realistically we want to get back to making films.’

Making films, after all, is what the Big Pineapple competition is all about. One page submissions are being accepted until the end of March, and the competition’s winner will be announced at the For Film’s Sake festival in April. Find out more here: https://www.forfilmssake.org/thebigpineapple/. 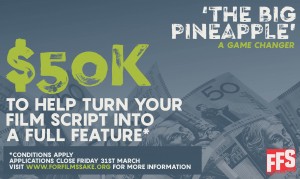