and that’s a wrap: Lip announces the winner of the 2017 rachel funari prize for fiction

We launched the Rachel Funari Prize for Fiction in 2013 in honour of Lip’s founding editor, Rachel Funari, to recognise her lasting contribution to the arts and her determination to better the opportunities extended to young women. As many of our readers may know, Rachel passed away unexpectedly in 2011 and we hope that by running the competition annually, we are not only helping to keep her memory alive – albeit in this small way – but we’re also providing an opportunity for women, female-identifying and non-binary writers, just as Rachel did.

Selecting a theme for the competition each year that is equal parts relevant and engaging as well as interpretable – without being prescriptive – is challenging but it’s also a lot of fun, and it’s heartening to see the ways in which writers have interpreted our themes over the years. Up until this point, we’ve been lucky enough to read some extraordinary short stories by some talented Australian writers.

This year, writers engaged with our theme ‘rebirth’ in diverse ways, but their stories featured shared elements: there were stories about hope and freedom; new life and motherhood; death and change and new beginnings; stories set in dystopian realities; and stories about survival and trauma and the grittiness of the human experience.

It goes without saying that putting together the shortlist each year is tricky – it’s a subjective process, after all – but the Lip team was particularly overwhelmed with the response this year in terms of both the volume and quality of entries. We really did have our work cut out for us, as did our judges – the wonderful Gabrielle Tozer, Sarah Kanake, and Lucy Adams – to whom we are immeasurably grateful for volunteering their time to judge the shortlist.

Each year we ask for creative, insightful fiction and each year, it’s exactly what we get. And the 2017 winning entries are nothing short of brilliant.

FIRST PLACE was awarded to Alexandra Philp for her story, Pools 2007. Alexandra receives a $1500 cash prize as well as other goodies courtesy of our sponsors.

Judge Gabrielle Tozer said of the winning story, Pools 2007: “Such an authentic, vivid portrayal of country life. I enjoyed the nostalgic framing and tight prose of this story, and was drawn in by the slowly unraveling family drama.”

Unfortunately, Alexandra was unable to attend the announcement of the prize at Tuesday’s Emerging Writers’ Festival’s Short Story Masterclass but we were fortunate enough to have judge and Voiceworks editor, Lucy Adams accept the award on her behalf. 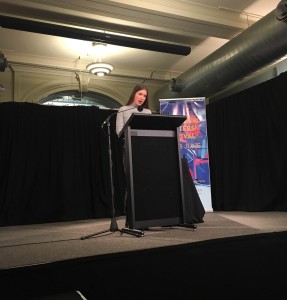 SECOND PLACE was awarded to Emily O’Grady for her story, Mammal – Emily was also not in attendance – and THIRD PLACE went to Alice Bishop for her story, Aftermath.

Emily Clements’ story The Glass Half was highly commended.

Winning stories will be published on our website in the coming weeks.

Thank you, once again, to our sponsors, judges and, of course, everybody who submitted their words: without you, there’d be no prize.