apology for causing the blues over ‘the sapphires’ 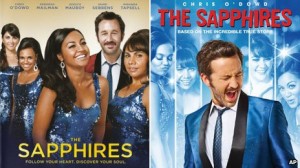 The 1960s is associated with many things; flower power, great music, Woodstock and free love. There was also a darker side which is equally well documented, the Vietnam War, political movements and the racial and social tensions of this period.

Many of these elements were explored in the Australian movie The Sapphires, based on the true story of a group of young women who formed a band and ultimately took their show to Vietnam to entertain US troops. What is remarkable about this group is that they were Aboriginal women, which was almost unheard of during that era.

While on the surface the movie is a feel good story about musical and personal success, there are threads of racism and sexism woven into the storyline.

The film was incredibly well-received, winning 11 AACTA awards, taking in $14.5 million at the Australian box office and receiving a 10 minute standing ovation at the Cannes Film Festival.

Unfortunately, this reception has been tarnished by the DVD cover art of the US distributors.  The image on the US version of the DVD shows the four members of the band transferred to the background and washed out in blue (I assume to match the blue of a sapphire?).

Front-and-centre of the shot is Dave Lovelace, the band’s manager, portrayed by Chris O’Dowd. While Dave is an important character in the story, he is still a supporting character and the stars of the show are in fact the girls in the band. This is almost an exact reversal of the Australian cover art.

Understandably, this has created quite a stir. The four real-life members of the group, Naomi Mayers, Beverly Briggs, Lois Peeler and Laurel Robinson, have responded quite strongly to this, stating that ‘it’s disrespectful to the very talented young Aboriginal actors in the film, and it’s disrespectful to us as a group. But in particular, it’s disrespectful to women of colour everywhere who have stood up against this sort of thing all their lives’.

Chris O’Dowd has strongly supported their position, commenting on Twitter that ‘it’s ridiculous, it’s misleading, ill-judged, insensitive and everything the film wasn’t’.

I have to say I agree with all of these sentiments. It is a disappointing reflection on modern society when it is thought a DVD cover showing a white male will be better received than a cover showing four indigenous women.

It is even more disappointing when the movie in question is about these four women and their story, detailing their experiences enduring both racism and sexism during their quest for success.  I can’t decide if it is irony, hypocrisy or simply an oversight, whatever the reason behind the change in cover art it is certainly ill-conceived!

While some people feel that using an image of Chris O’Dowd to promote the movie was actually a smart move based on the fact he is building up a following in the US, over 18,000 others agreed that it was both racist and sexist. These 18,000+ people signed an on-line petition started by an Australian woman Lucy Manne.

Ms Manne explained that ‘The Sapphires is about to be released on DVD in the US, which is great. Not so great is the cover which features a huge photo of a male supporting character, with the female stars of the show relegated to the background (in a weird blue monotone effect, just to add insult to injury). Disgusting.’

It would seem that this campaign has had some success with the company, Anchor Bay, issuing an apology stating it ‘regrets any unintentional upset caused by the upcoming US DVD release of The Sapphires’. The company has also stated it is considering new cover art for future releases.

While this acknowledgement from Anchor Bay is a testament to the power of social media, it is still a shame that the DVD will be distributed with this cover in place.

Despite the fact that the actions of the company are reflective of the racism and sexism that this group experienced in the 1960s, it is very heartening to see that the attitudes of the general public have moved on enough to warrant such a magnificently outraged response. Hopefully, the distributors will do more than ‘consider’ a change to the artwork in the future.

What do you think of the US cover? Is it racist or a smart move to capitalise on Chris O’Dowd’s image?

Let us know below!

3 thoughts on “apology for causing the blues over ‘the sapphires’”