campaign 2016: a different side to hillary clinton 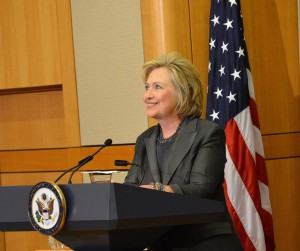 After Hillary Clinton’s announcement that she will be running in the US Presidential Election next year, the drastic transformation of her image from cold and calculating to feminine and soft has raised many questions regarding her policy stances, sincerity and motives. Clinton is no stranger to media spotlight, coming under scrutiny while acting as First Lady to Bill Clinton, and while being in the political arena herself. During her 2008 campaign against Obama, Clinton was frequently labeled as ‘calculative’ and ‘tough’. She remained apparently removed from her femininity in what was assumed to be a strategy towards succession, particularly in regards to National Security and Defence, which are typically considered masculine areas.

A study of the campaign described Clinton as ‘not feminine enough in pantsuits that covered her cankles’. Her perceived masculinity received an unprecedented amount of negative coverage, notably on her clothing choices, such as frequently worn pantsuits and scrunchies. The media scrutiny received was similar to that faced by other female politicians such as former Australian Prime Minister Julia Gillard. In 2008, Clinton was accused of having a ‘meltdown’ when she showed anger during a debate. Contrastingly, in January 2007, her supposed ‘ice queen’ persona lapsed, as she teared up during an interview. The media exposure of this event increased her poll favor by women from 30 per cent to 46 per cent. This example of human sensitivity indicated stereotypical ‘womanly’ qualities are required for support towards a female leader.

It appears that in the 2016 election she has learnt from her loss in the last campaign and has re-branded herself to align with progressing societal values towards equality, stating that she wants to become ‘champion for everyday Americans’. Clinton’s emphasis on protecting the “underdog” was reinforced by her first campaign event, stating ‘there’s something wrong when CEO’s make 300 times more than the typical worker [and there’s] something wrong when hedge fund managers pay lower tax rates than the nurses or truckers’. Michael Short, the spokesman for the Republican National Committee, has criticised this as hypocritical, with Clinton herself receiving funding from CEOs, as well as accepting money from lobbyists and political action committees.

In the last few months, Clinton has also been talking extensively about gender rights and equality. Her potential opponent from the Republican Party, Carly Fiorina, has accused her of playing the ‘gender card’. Fiorina argues that elections should be run on track records, honesty and policies, rather than ‘identity politics’.

Clinton’s rebuttal of this idea has shown to be extremely successful for her campaign. The election of Obama, which empowered ethnic communities because of his own background, similarly shows that the nature of politics is irremovable from personal identity. While being a valuable political tool, the changing persona of Clinton towards her gender has simultaneously created a degree of distrust. Notably, Rand Paul has extensively criticised the acceptance of funding for the Clinton Foundation from Saudi Arabia, arguing it is hypocritical to accept money from a country where ‘rape victims are publicly lashed’.

Fiorina argues that if elected as her opposition, this will dismantle Clinton’s ‘gender based’ strategy. This can be seen as true to the degree that the sex of the candidate will no longer be an impeding factor. It is also evident that Clinton’s emphasis on women’s rights has been cemented into her policy promises, transcending all minority groups and not simply being an intangible ‘gender card’.

An example of this is her strong endorsement by the gay community, with Clinton being the first mainstream candidate to announce full support for homosexual marriage. This has transcended into an informal “I’d Bottom for Hillary” t-shirt campaign, with ‘bottoming’ being the receptive partner in penetrative sex. In an interview with Ryan, the 23-year-old creator, he explained that ‘it is a fun way for people to show support for a presidential candidate’. The action has received both criticism and support from the gay community. Commentator Zach Stafford argues that it is ‘bottom-shaming’, stating that ‘gay men should be allies against the misogyny that women face every day, not printing t-shirts celebrating it’.

Clinton’s full-fledged support towards gay marriage contrasts with her statement in 2000 that ‘marriage is as a marriage has always been, between a man and a woman’. While Clinton was First Lady and played an advisory role within Congress, she acted in support of many anti-gay policies that were introduced, including the 1996 Defense of Marriage Act. This has resulted in vocal opposition and uncertainty from the public. One such critic is politics blogger Andrew Sullivan, who suggests that Hillary Clinton’s stance is purely based on the political environment, ‘As long as marriage equality hurt the Democrats, they were against it,’ Sullivan said. ‘Now it may even hurt Republicans, they’re for it. So Hillary is for it now.’ Her gradual and private evolution on the matter, however, indicates that this may have been an authentic individual growth. As Hillary said herself in 2014, ‘I’m just another American who evolved.’

Hillary Clinton is offering empowering social promises. If she is elected, it will undoubtedly be a stepping-stone in history for women’s rights and gender equality. Her inconsistency, however, begs the question of whether these issues are merely being manipulated to suit the political climate, or if they are a genuine and personal transformation. While political identity will indisputably be a deciding factor in the campaign, the most important thing is whether it will be implemented into policies, and if it is reflected in accomplishments and past actions. If a vote is cast for Clinton purely ‘because she’s a woman’, rather than her ability, that would be going against the very equality we are fighting for.