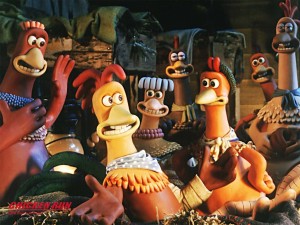 Humans are usually credited for their work in films, as are dogs, cats and even the odd celebrity chimpanzee. Chickens, on the other hand, are afforded no such luxury. The uncountable scores of poultry that have appeared uncompensated must certainly reach a staggering figure. Unfortunately, the most attention generally afforded to them in film relates to their slaughter (Hidden (2005), Mondo Trasho (1969), Lacombe, Lucien (1974)).

The closest thing to a chicken celebrity is Tori Spelling’s silkie, Coco. In addition to the shame of being carried everywhere in the same manner as Paris Hilton carries her chihuahua, this unfortunate feathered being is even sometimes forced to wear matching outfits as her owner and worse: garments designed and made by Tori herself. The horror, the horror!

Chicken Run (2000) is a welcome and quite unique break from the chicken ignoring norm. This is a claymation film and thus one not featuring any actual chicken actors. Nor can we expect the chickens to voice the characters themselves for several very obvious reasons. This is indeed a shame but nonetheless an important step in the right direction for chicken rights everywhere. The large chorus of protagonists is composed almost exclusively of chickens save for some rats and two odious human beings. For once, in Chicken Run, chickens abound, the chickens in question are smarter than humans and the chickens actually emerge victorious.

Like Monsters Inc. (2001), The Lion King (1995) and Shrek (2001), Chicken Run possesses that magical ability to transcend the artificial barriers erected between movies made for the consistently incorrect and confining concept known most simply as a demographic. The plot, characters and claymation at first appear to be solely for children, but universal appeal immediately becomes apparent when it is realised that the voice booming out of the lead chicken, Ginger, is the same as that of one Miss Lydia Bennet.

The story is ridiculously simple: this is a poultry version of The Great Escape (1963). Life is dull, awful and dangerous for the chickens of Tweedy’s farm. Ginger (Julia Sawalha) has always dreamed of escape and the free-range lifestyle. Such musings become a necessity when it is learnt that Mrs Tweedy (Miranda Richardson) has a cunning eye for business, hates chickens and intends to do away entirely with Mr Tweedy’s (Tony Haygarth) egg business to found a chicken pie factory in its place. Inspired by such an imminent threat, she and her fellows conspire against their owners, devising a genius plan for escape. Mel Gibson even makes a surprise appearance in rooster form, as the American heartthrob, Rocky.

Chicken Run is the proof that human stories can be transposed perfectly into a chicken-specific reality. No more do chickens need to be constrained to roles where their presence functions as little more than background noise as farm animals, someone’s dinner or worse; imitated terribly by obese humans dressed in their likeness.

Perhaps too, chickens could begin to take on a more active role in various as of yet unmade films, or even remakes. Toto was uncharismatic in The Wizard of Oz (1939) as was Flipper’s eponymous dolphin. In the case of Flipper, a chicken would certainly out perform the entire human cast.

Or finally, chickens could feature more frequently as fragments of poetic imagery. The simplistic elegance of the story that Raoul reads to Nana in Godard’s Vivre sa vie (1962), wherein the elements and soul of a chicken are dissected theoretically, is for many one of the film’s defining moments. Such an innocent thought outshines even the beauty of the gorgeous Anna Karina.

Le Coq was the symbol of the French revolution. On a farm, roosters traditionally wake us every morning. Chickens are useful – valuable even, yet the most compliments they generally receive outside of dedicated chicken shows generally relate to how they look and taste when served steaming and decidedly dead upon a plate. This is partially why Chicken Run was just so enjoyable. In addition to its incredible humour, which would function magnificently in any context, it forces us to look at chickens in a different light. Vive la chickolution!

Image providing by the lovely Amy!