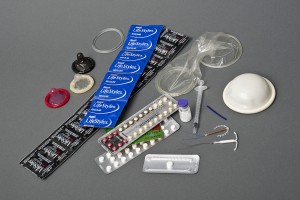 An introduction to contraceptive choices

From the Ancient Egyptians’ use of crocodile dung to drinking hot mercury tea in Ancient China, people fearing an extra mouth to feed fretted over the best means to avoid bearing one. Contraception is a global, timeless issue which some big international players – most notably the United Nations – recognise as being imperative to the empowerment of women, alongside other forms of reproductive and sexual health care.

In 21st Century Australia, we are relatively lucky to have access to multifarious safe options. These are mostly accessible via the Pharmaceutical Benefits Scheme and – unlike menstrual products – we experience the mild convenience of condoms being free of the Goods and Services Tax. Once the relief of no longer having to battle a croc for its poop wears off, however, we may very well be perplexed as to what method suits us best.

To lump your choices into two broad categories, hormonal and non-hormonal contraception is available.

For those unable or preferring not to use hormonal contraceptives however, there are numerous options too. Non-hormonal methods include condoms (which can be for innies or outies), copper intrauterine devices, single size or tailored diaphragms, fertility planning methods and permanent procedures.

Family Planning New South Wales’ Medical Director, Dr Deborah Bateson says in both categories, some measures are more effective than others. ‘The contraceptive implant and hormonal IUD are the most effective hormonal methods as the woman does not have to remember to “do something” such as take a pill on a regular basis,’ Dr Bateson said. She also notes copper IUDs and permanent methods top the class in non-hormonal methods for effectiveness. ‘Family planning organisations have some great brochures on all methods to help women and their GPs navigate the best choice for an individual woman at a particular time. One size does not fit all!’

Which anti-up-the-duffer is right for you?

One size certainly does not fit all and one criteria – i.e. I don’t want no babies – should not direct you to just any old method to be used over the course of 40 years.  Dr Bateson says quite simply, if you’ve had breakfast with Dianne for decades, it doesn’t mean you shouldn’t take a chance on another commitment. ‘Contraceptive methods come in many different varieties which suit different people at different times of their reproductive life,’ Dr Bateson notes.

Things to regularly take into consideration are whether you need the flexibility of not having to actively remember to use your contraception. Another query should be whether you want protection against sexually transmissible infections; if you and your partner/s have not committed to mutual STI screenings or disclosed your STI status, incorporating barrier methods like condoms and dental dams in your varied sexy time routines is highly recommended by sexual health professionals.

Some hormonal contraceptives have added benefits like keeping acne or heavy periods at bay, but conversely they may also have some side effects. ‘For most women the risks of hormonal methods are small although there are a small number of women who cannot use certain methods because of pre-existing medical conditions,’ Dr Bateson said. For example, individuals with a history of migraine with aura, venous blood clotting and smoking beyond the age of 35 might be excluded from using some hormonal methods. Similarly, non-hormonal contraceptives like latex condoms may trigger an allergic reaction for some people.

In spite of this, Dr Bateson says all forms of contraception are about you doing you and finding what works best. ‘Some people will experience no side-effects while others may need to try a few methods before finding the best fit for their circumstances,’ Dr Bateson declares. ‘We would always advise seeing your doctor to discuss the side-effects so they can help find a method that is best suited to you as an individual.’

Dr Bateson says the Pill and condoms are still popular options in Australia, but worldwide, the tides appear to be changing. ‘Long acting reversible contraceptives (LARCs) including implants and intra-uterine devices (which can be hormonal or non-hormonal) are gaining popularity,’ Dr Bateson said. ‘We still lag behind many countries such as Sweden and The Netherlands in the uptake of LARCs.’

This is of course tied to choice, but Dr Bateson notes one millennia-old trend has got to go: the burden of contraceptive responsibility on women. ‘There is increasing recognition of the role of partners in shared contraceptive decision making,’ Dr Bateson said. ‘Increasing public discussion and debate around this topic is important, as is school-based education about fertility and fertility management for boys and girls. My clinical experience and recent research suggests that many men are keen to take responsibility – especially if their partners have not been able to find a contraceptive method to suit them.’

Researching the Future of Contraception

To reflect this needed shift to share contraceptive responsibility, viable research in male contraceptives is being undertaken. ‘While it is still early days, a new form of potentially reversible male sterilisation called vasalgel has created a lot of interest in the world for men and their partners who want a “set and forget” method similar to vasectomy which can be reversed if circumstances change,’ Dr Bateson said.

This complements a range of studies and new developments in both hormonal and non-hormonal contraceptive products which have been traditionally targeted at women. The current state of play is to develop new hormonal products with lower doses and added benefits for women, as well as new, effective non hormonal options. However, the ultimate aim of the game, Dr Bateson says, is to improve efficacy with fewer side effects irrespective of method. ‘We want people to have as many choices as possible so they can find a method that suits them best.’

Note: This article has been written in a bid to avoid gender binary terminology but in some sections gendered terms were necessary to reflect inequalities. If you would like to write on your experiences of contraception as a non-binary person, contact our Features Editor via [email protected]