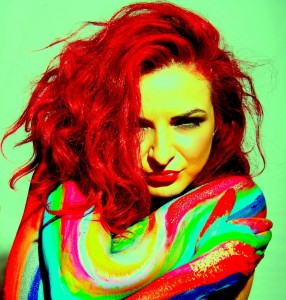 ‘If Anthony Kiedis, Slash and Tina Turner had a red-head musical love child, I’d be her.’

23-year-old Melbourne-based musician, Mimi Velevska exudes a warm-hearted, carefree and charismatic attitude that seems to rub off on those that are affected by her presence.

Through her music, Velevska endeavours to help everyone do away with the same kind of inhibition that once held her back from being what she calls her ‘super hero-self’ on stage, by providing a forum for self-expression and creativity.

Velevska studied Jazz music at the Victorian College of The Arts and graduated in 2009. She says that she was a very shy performer.

‘Growing up, I thought I’d be like Alicia Keys, and what really changed me and the way I write was when I read Scar Tissue by Anthony Keidis and I really got in to The Red Hot Chilli Peppers,’ she explains enthusiastically, ‘I was just like, “you know what, you only get one life and I want to look back when I’m 80 and be like, I had this ridiculously big, red, hair, and I used to dance and sing on stage like crazy!”’

Off-stage, Mimi Velevska describes herself a safe person, she chose to pursue a career in Jazz Music over one in Law and at just 23 years old, is only interested in being able to actively show people how to have a good time and enjoy themselves.

‘For me, performing is like an exorcism, it’s a moment when you forget all of your problems. You know, I probably have a billion parking fines to pay, but I don’t think about those things when I’m on stage, it’s a place where my soul can breathe,’ she says.

Her introduction in to the world of art was at a childhood audition for The Lion, Witch and Wardrobe.

‘I just went along with friends and I wasn’t in to it. There was something mentioned about British accents and at the time I could do a British accent so it was an accidental start in to being a performer as a bit of a hobby.’

Given her experience with shyness and artistic safety, she feels that sometimes a lot of artists are held back by a fear of being judged.

For this reason, Velevska’s Bona fide Electric EP launch will be a celebration of Melbourne art, music, creativity and self-expression.

‘If anything, when people come to my show, I want them to feel like themselves. They invest one or two hours and in that time I want them to forget whatever is happening in the world and just enjoy this time, this moment and this place, because they’re not going to get it back again,’ she says.

She classifies herself as a bit of an extrovert, which becomes apparent when talking to her. She admits that she prefers people that she works with to feel comfortable around her, even if it means she has to be the silliest person in the room.

‘It makes people understand that I’m just about having fun and not to take things too seriously,’ she says.

People who have never heard Velevska’s music can expect a voice rich with heart and soul that listeners will find refreshing.

‘My EP is just all about dance and really just a joyful kind of music more than anything,’ she says.

The Bona fide Electric launch will feature live performance, go-go dancers, body painting and more; something that she feels is quite symbolic.

‘I’m just trying to create a space where people can exhibit their own work. I started incorporating actual body painting within my show to say that you are really immersing yourself in the art,’ Velevska explains.

She hopes that audiences who decide to take a chance on her gigs will feel satisfied with the vibe that she creates on the night.

‘I know I’m not a huge celebrity, but I try to make an environment so artists—visual artists, designers, musicians, whatever, can share their work and they can invite a couple of their friends and say, “this is where I’m exhibiting my art, come check it out!”. And at the end there will be a big celebration,’ she says, ‘I’ll perform at the end and it’ll be one big, happy, colourful experience!’

Velevska’s single, I’m Yours is available to watch on YouTube and her EP, Bona fide Electric will be available on BandCamp and iTunes and also at the launch.

‘At the show, I’d like to think that the audience will be the type of people that will come together over a mutual understanding and love for music and art,’ she says.

Mimi Velevska’s EP launch is on November 22 at The Evelyn, Brunswick St, Fitzroy. Tickets are available for $8 through Moshtix or $10 at the door.