defying the beauty bias: body-image in claymation and documentary 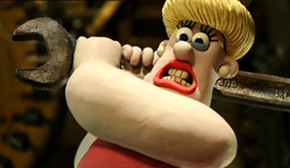 Popular culture is full of images pressuring us to conform to so-called acceptable ways of being. These ideas are so all-pervading they become the norm and we forget that the stories we hear through our favourite characters are a deliberate social construction. Such as when we assert the stereotype that all fat people are lazy. Of course all fat people are not lazy but this idea serves the purpose of demeaning fat people and therefore keeping us ever vigilant about our own social acceptability.

Take Wallace and Gromit. Beneath that much-loved claymation series featuring a mild-mannered, cheese-loving eccentric and his faithful and intelligent dog lurks a world of gender and beauty stereotyping.

In the comedy murder mystery episode A Matter of Loaf and Death (2008), Wallace and Gromit, having opened up a new bakery business, find themselves in danger of being the next victims of the so-called Cereal Killer who has been systematically murdering bakers.

Wallace meets and falls in love with Piella Bakewell, a former pinup girl for the Bake-O-Lite bread company. Despite Wallace’s infatuation, after a small amount of suspicion and a large amount of ingenuity on Gromit’s part, Piella is revealed as the Cereal Killer. A suspense-filled action scene involving a cake, a bomb, an abundance of bread dough, some cute ducklings and kittens, and a pair of giant oven mitts sees the homicidal Piella overthrown and our two heroes emerging from their adventure victorious and safe.

This fun and funny episode has delighted adults and children alike. It won a BAFTA and was nominated for an Academy Award. But this seemingly innocuous piece of entertainment is teeming with assumptions and stereotyped biases about gender, beauty and personal power. In particular, the mantra that only thin people can be beautiful.

At the crux of Piella Bakewell’s murderous intent is her dissatisfaction with her own body. She is no longer thin and so believes she is no longer beautiful. She resents bakers for making the products she ate which caused her to put on weight and thereby resulted in her losing her job as the Bake-O-Lite Girl. She is so wrapped up in self-loathing she is unable to accept her own value as a person, and to appreciate Wallace’s romantic interest. The only story Piella is able to hear is how the loss of her figure brought the loss of status, loss of income, loss of youth and loss of personal worth. Sound familiar?

The typecasting doesn’t end there. The gender representations are stereotyped and archaic. We first meet Piella when she is rescued from apparent bicycle brake failure by a brave and chivalrous Wallace. She is the classic damsel in distress, while Piella’s miniature poodle Fluffles is everything a girl should be: petite, well-groomed, pink-collared, obedient and helpless-seeming. Even when Fluffles is at the control of the Piella-vanquishing forklift, the hardhat she wears is pink. And, despite having asserted her independence and saved the day, at the end of the episode she is alone and forlorn, in need of rescuing by an eager Gromit.

Don’t get me wrong: I love Wallace and Gromit as much as the next person. What I want to point out is just how deeply engrained throughout all aspects of our lives are assumptions and biases around beauty and gender, and how this affects our sense of individual value.

When Adelaide woman Taryn Brumfitt posted an unconventional “before and after” image of herself online in 2013, little was she prepared for the 100 million views, the media frenzy and the swathes of both hate mail and support messages she received.

In her 2016 documentary Embrace, Taryn takes the matter of body diversity to the streets and across the globe as she interviews women from many walks of life about their own body image. Overwhelmingly, the message is that most women, at worst, hate their body and, at the very least, experience body image insecurities (although, unlike Piella Bakewell, tend not to resort to homicide).

Is it any wonder? The media, fashion and advertising industries provide such a narrow (or should I say thin) definition of beauty that it is impossible to live up to expectations. Once past puberty, cat walk models develop eating disorders to maintain “the look,” swallowing cotton balls to fill their bellies. And it’s no secret that magazines and fashion advertisers airbrush the images of their photo models into perfection.

We all know it’s artificial, but we glorify it and conveniently forget this fact by trying to apply the same standards to ourselves, embarking upon journeys of self-hate because we cannot emulate that which is not real. So, no points for guessing why the cosmetic surgery industry is booming. Not to mention the millions of dollars Australians spend each year on diets.

A primary theme of Embrace is that the media’s representations of beauty are unrealistic and therefore work as a damaging form of oppression of women and girls. Constantly worrying about how we look is a complete distraction from a focus on the rest of our lives. The strength of Embrace is that it seeks to encourage women to reject body-image oppression. Its message is to reclaim our bodies, to know that beauty comes in all shapes and sizes, and to accept that we are more than just how we look.

Wallace and Gromit reminds us it’s time we start questioning the stories we tell ourselves. If we allow mainstream standards of beauty, gender and sexuality to continue unchallenged, we leave ourselves open to the perpetuation of unattainable definitions of self-worth. We leave ourselves open to lives of feeling less-than and never-good-enough. We marginalise that which is most natural of all: the diverse nature of beauty, and the fundamental beauty of diversity.

One thought on “defying the beauty bias: body-image in claymation and documentary”