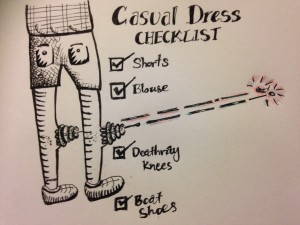 If we use pop culture as the barometer for women’s workplace fashion, the 70s is defined by Christina Hendricks’ pencil skirt and cinched waist in Mad Men, the 80s was all about Melanie Griffith’s power suits and shoulder pads in Working Girl while in the 90s, Calista Flockhart’s Ally McBeal wore short skirts much to the shock of Boston’s fictional law fraternity. What then, does women’s workplace fashion look like in 2016?

First we have to consider that this decade’s workplace is synonymous with technology companies, start-ups and entrepreneurs with their cool offices, flat hierarchy and flexible working arrangements. It’s a world where office dress codes are antiquated. Therefore, the fashion choice for today’s bosses, employees, billionaires and technopreneuers is the jeans and hoodie combo made popular by Mark Zuckerberg and Silicon Valley’s cool geeks. It is an outfit that extends the uniform of teenagers and youths into adulthood and scorns at the idea that people have to suit up to be taken seriously.

While jeans and hoodie are technically gender neutral outfits, it is hardly the choice outfit for the women CEOs. Marissa Mayer and Sheryl Sandberg, some of the highest ranking and well known faces in technology wear suits and ‘professional’ attire when they give press conferences or speeches. What then, do women wear when their office has no dress codes?

Angela, a software developer, sheds some light on this. ‘I have a lot of flexibility because I don’t interact with clients or external parties,’ she said. ‘So most days I show up to office in flats, jeans and a t-shirt that is work friendly which means nothing with a cartoon or comic characters. That’s my personal rule although I’ve seen the guys wear superman t-shirts.’

While technology companies have no reverence for dress codes, government agencies, bank, consulting companies and law firms are the opposite. These are places where an employee needs to decipher dress codes like business professional, business casual or business formal. Women, especially, have to adhere to a longer list of both written policies like wearing closed toe shoes and unwritten policies like no sequins or visible bra straps.

It is no wonder that when these companies jump on the casual Fridays bandwagon, it still comes with a long list of dos and don’ts. Employees are encouraged to show their personal styles, but not too much! Sure, wear a cool brown leather jacket but make sure it doesn’t have a Metallica logo! Be comfortable, but don’t wear flip flops!  For example, when JP Morgan relaxed its dress code for non-client facing employees, it cautioned people against interpreting the new dress code as “weekend casual”. This means no athletic shoes, flip flops, sweatpants, leggings, yoga pants, hats, hoods, halter tops, or anything else “distracting, tight, revealing or exceptionally loose or low-cut”. Even jeans, the universal sign of casual-ness is not considered business casual by JP Morgan’s standards.

Bernie, an executive assistant in a consulting company recalls a time when the boss sent a stern email reminding people that ‘Casual Friday [did] not mean Clubbing Friday’ because a some of the young female associates came to work in a halter top. ‘Honestly, I don’t see what is the big deal because the point of casual Friday is so that you can go from work to your after work plans without changing clothes. If people are now second guessing what they wear, what’s the point of relaxing the dress code?’

She makes a good point. The truth is, casual dress codes and even the no dress code policy gives employees the impression that they are in control but in reality, they still need to conform to the company and societal expectations.  One of the Big 4 global accounting firms, PwC officially scrapped its ‘modern professional’ dress code this June and asked its employees to do just that: use their own judgement on what is an acceptable outfit. That might have dashed some hopes for employees who were hoping to rock up in their trackpants.

Qi, a lawyer, breaks down the dress code for her office including the company’s policy on the divisive hoodie:

‘Since I practise in IT law, I can get away with jeans and sneakers because my IT clients expect me to wear less formal office attire. That’s great because I neither own nor wear high heels or dress. Can I really come to work in a hoodie? Generally, no because it is against professional dress code attire which also means no shorts, ripped jeans or dirty/broken shoes. One exciting thing about casual days is that lawyers can wear more colours instead of the black, grey or otherwise neutral colours. I already do so it doesn’t really apply to me. When another lawyer friend of mine wore wear a coloured blouse, her colleagues thought she was secretly interviewing for a new job!’
It is obvious that for many women, dress codes are still a minefield and a source of battle stories. Perhaps we should all dress for work based on one simple rule: if it needs ironing, don’t wear it.