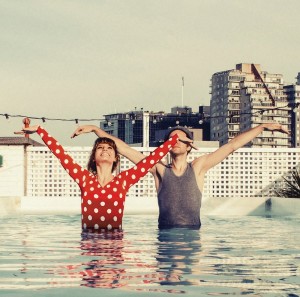 Melbourne-based duo, The Twoks launched their first full-length album, Two, on Friday November 9, at Revolt in Kensington. Xani Kolac and Mark Leahy craft a soundscape that moves from lush and dark, as on their new single, Making Holes, to big, light and free, like the infectiously danceable title song from their 2011 EP, 240 Volts. Thoroughly modern, they also manage and book themselves.

Kolac and I discussed the new album, looping, and her legendarily dextrous feet.

The Twoks derive their unique sound from Kolac’s vocals, violin through effects, a BOSS RC-50 Loop Station, and Leahy’s inventive, often tribal, percussion. Being a DIY outfit they’ve accepted help along the way.

‘Because we spent all our money on touring to Edinburgh Fringe Festival last year we also needed to do a bit of crowd-funding,’ says Kolac. ‘We made Twoks Clocks and t-shirts and got so much support from so many wonderful people. So the new album has the names of our major supporters on the front cover! It’s a really special album about being just two musicians and yet, being able to make so much noise.

‘In a way, this year has been about going from just two musicians to a big family of people and audience members who are genuine supporters of us trying to share our art with the world. The launch is happening at Revolt in Kensington which is a converted warehouse and it’s awesome. There’s gonna be a live traditional Irish Session, lights by one of the best and most creative lighting guys in this country and a whole bunch of other surprises, too. We just want everyone to come out and celebrate with us – it’s as much an album for everyone as it is for us.’

Their live shows are heavily improvised and their fans flock to hear a huge sound belying that the band consists of only two players. Because capturing the feel of their live shows on an album would be nearly impossible, Kolac and Leahy let their inspiration guide them through making Two, even recording in an underground car park.

‘The underground car park was so beautiful to record in and so we performed in a way that suited that space,’ Kolac says. ‘Being surrounded by cars and car parts in the mechanics workshop meant that Mark would find different percussive sounds that gave the album its grit and industrial sound.’

Because ‘live looping can be extremely boring to watch,’ as Kolac says, she’s always looking for ways to make it more fun. Clearly she has succeeded because her feet made it into a recent Inpress comic strip.

‘Haha! Yes, that comic strip was gold,’ Kolac says. ‘Fred Negro is the author and he is an eccentric character famous for his comic strip! He’s not alone in discussing my feet and the role they play in creating a live performance. It’s true that they have become very dextrous as the work I have to do with the loop pedal and all the other pedals I’m trying to operate really demands several limbs! I actually started operating the pedals with my toes almost straight away because I’d have a violin in one hand and the bow in the other, which left no hands left for tweaking.

‘But at the beginning, I would sit down to play so I had much more flexibility. When I made the decision that I wanted to stand during a live show, tweaking with my feet became more challenging. I’m always working hard on this and there are still times when I either miss a cue or worse, fall over!’

To view video or live performance of The Twoks is to feel an enormous sense of freedom, virtuosic as the music is. I ask Kolac about sensing this.

‘I suppose that’s what we’re feeling, too!’ she says. ‘There’s a sense of lift-off, like we just have to start doing it now rather than planning and organising how we’re gonna do “it”. It’s been really liberating grabbing hold of the reins so we can move forward, instead of side to side and back and forth. I think one of the big things for me has been letting go of the reins just a bit so that Mark can grab hold of them, too.

‘I’ve been trying to build The Twoks since 2007, searching for the right players, the right sound, the right direction and then Mark came along. It’s hard to believe that the two of us have only been doing this duo thing since April 2011. It feels like we’ve been doing it all along! I think it’s what I’ve been waiting for – the chance to move forward with another musician who wants to move forward at the same time, in the same direction and in some crazy, imperfect synchronicity.’

Check out that undeniable synchronicity on Two, available on iTunes.