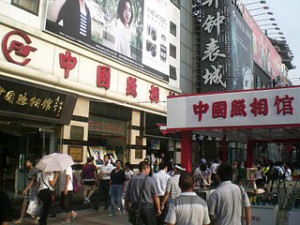 It would be easy to assume that the bulk of prospective candidates put forward for romance at the Shanghai Marriage Market are men. According to the National Bureau of Statistics, by 2020, there will be 24 million more Chinese men between the ages of 20 and 44 than women. But in fact it is the parents and grandparents of ‘leftover women’, a derogatory term used to refer to Chinese women in their 20s and 30s who have not yet married, who are frequenting the market the most.

Listed as a tourist attraction on Trip Advisor, the Shanghai Marriage Market is situated in the People’s Square, which was formerly a racecourse. The Marriage Market, otherwise known as ‘Matchmaking Corner’, takes place every Saturday and Sunday from midday until around five in the evening. On the gates of the Square hundreds of parents post ‘resumés’ of their sons or daughters and spend their time there exchanging contact information with other parents interested in their child’s romantic credentials. Translators are available.

The process is known as zhenghun, or ‘marriage seeding’, and it is not just a cultural practice for tourists to marvel, but is seen as a crucial step to take to secure a son or daughter’s future happiness.

Despite the fact that there are millions more men in China than women it is increasingly documented that professional Chinese women are struggling to find appropriate matches who are as accomplished as they are. Others say that after years of education, women want to enjoy their freedom past their late twenties, which is considered the time at which they should be marrying and starting families.

The average age of a woman’s first marriage in Shanghai last year was 27.3 years, up from 26.4 in 2007. But according to Roseann Lake, who is based in Beijing and writing a book about marriage in China, it is also worth considering that by age 35, more than 90 per cent of Chinese women have married.

Ms Lake makes the point that, ‘Chinese women are only left over for a limited time, which makes the fact that they’re labeled “leftovers” even more hideous.’ Lake says that China’s real leftovers are poor, uneducated men living in the countryside, who receive little attention.

China’s one-child policy has created a lopsided gender ratio because many families prefer sons and have chosen to have sex-selective abortions. So in theory, women should have their pick of potential lovers and soul mates. And on a statistical basis this is correct, yet there is growing societal pressure to see women married sooner.

Labelled shengnu, or ‘leftover women,’ many of these educated, urban single women are coming under intense pressure to marry. Parents fear that their daughters will end up childless, lonely, and economically vulnerable in a society that lacks the social safety net communism once promised.

To give some contemporary context to this there is now such a thing as a ‘naked wedding’ that does not refer to marriage in the buff, but rather a marriage that occurs when neither party own a house or car.

One would think that the pressure on women to marry sooner is something that the All-China Women’s Federation might choose to take on. On the contrary the state-run feminist agency publishes articles with titles like ‘Eight Simple Moves to Escape the Leftover Women Trap,’ and ‘Do Leftover Women Deserve Our Sympathy?’ – offering simply the answer ‘no’ they don’t.

Sandra Bao, who founded a social group called Leftover Attitude in Shanghai to support unmarried professional women says, ‘Shengnu are being demonized … Parents are pressuring us, the media label us, there’s a whole industry of matchmakers and others out there telling us it’s a problem to be single.’

According to a census analysis by Wang Feng, the director of the Brookings-Tsinghua Center for Public Policy in Beijing, the number of urban Chinese women in their late 20s who are single has risen from 1982 to 27 percent. Those who remain single typically live in urban areas and face cultural barriers to marriage such as a male preference for younger women, and those who are not as accomplished as they themselves are.

In the meantime, weekends at Shanghai’s People’s Square are considered the last hope for many thousands of Chinese parents who desperately want to see their sons and daughters get married. But interestingly it seems to be the guardians of the prospective partners not the protagonists themselves showing up to the event.

One thought on “exploring the shanghai marriage market”