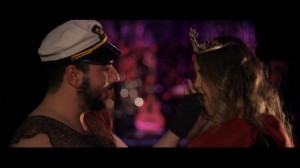 ‘I started daydreaming about a world with different beauty ideals from our own’, says film maker Tessa Musket about her 2012 film Fatland —  the story of a world where it’s cool to be fat.

Fatland follows the life of Phoebe, a 19 year old girl who suffers from a disorder that prevents her from gaining weight, and her quest to snare rock star Maloney. When his band stages a competition to find their biggest fan, with the first prize being a date with the frontman himself, she soon finds herself donning a fat suit, in direct contravention of the competition rules, strutting her padded stuff for the band and a sea of fans.

Building on a personal love of films with messages of acceptance and those feel-good movies where it feels like anything is possible, Tessa transformed her desire to create something unique and meaningful into something we can all enjoy, and for most of us, melt into with a deep sense of understanding and relation.

‘I used to imagine what it would be like to have a rounder, fuller figure, and be praised for it. It was a fantasy that made me happy,’ says Tessa. ‘It makes me so angry that we’re all made to feel that our bodies are supposed to be different from how they are.’

And with that, Fatland came into the world after an intensive year of development and production, with cast and crew playing pivotal roles in this attitude-changing creation. But it wasn’t quite as easy as that when starting out, as Tessa says, ‘Casting is always a very superficial and discriminatory process’.

‘A lot of actors I approached weren’t interested and thought I was rude targeting them because of their weight,’ she says, but eventually managed to find the right people for the job.

‘Sophie Saunders, who played the lead, has always felt self-conscious about how her body isn’t “very womanly”, which was her entry point into a character who is also dissatisfied with her physique. I think it’s a topic that’s relevant to everyone.’

That it is, as I’m sure you all will agree. So, are you interested in finding out more? Me too. And that’s why Tessa and her Fatland creation needs a little community support, and why we here at Lip are determined to help find a place in society for a film like this.
Tessa’s hopes are to take Fatland to as many film festivals as possible, including the Sydney Underground Film Festival (SUFF), an event she plans to enter a movie in every year until she dies.

‘This festival is my favourite thing because it attracts the best people and creates such a safe yet exciting atmosphere. It’s a place where I really feel at home. Some of the very weirdest things I have ever seen on film were at SUFF.It has thrilled me and traumatized me, which I love,’ she says.

Now it’s time for Fatland to take the SUFF stage, and with hopes of encouraging people to talk about the movie and generally feel better about themselves, Tessa’s putting out the call for help to get it there.

Fatland needs financial help to cover costs of the festival entries, and avid supporters to help spread the word and ultimately create an unstoppable band of Fatland groupies who will take on the world one film festival at a time.
If you can spare a small donation to, visit Tessa’s Indiegogo campaign page. The campaign ends in just under a week, so now’s the time to get on board.

Indiegogo: Fatland on the festival circuit
Fatland on facebook