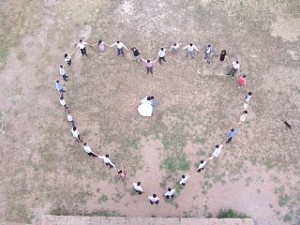 The ACT Government has introduced legislation into the Legislative Assembly to allow same-sex marriage in the territory.

If the bill passes it will be the first State or Territory in Australia to approve same sex marriage laws. But even now there is speculation that the Federal Government will mount a High Court challenge.

The bill has the support of all eight Labor MLAs and Greens member Shane Rattenbury and is highly likely to pass.

‘The ACT sought legal advice in 2008 which shows that a bill that did not contradict the Federal Marriage Act would be constitutionally valid,’ Ms Gallagher said.

The eight Liberal members on the opposition benches will all vote against the bill because they believe it should be dealt with by the Commonwealth.

Same-sex marriage is undoubtedly a national issue, but there is more than one way to skin a cat.

With a distinct lack of national action, States and Territories are stepping in with their own same-sex marriage legislation for this important social reform.

Earlier this year Tasmania stepped up to the plate again, and for the first time passed same-sex marriage legislation through its House of Assembly. The bill was later defeated, on a knife edge, in the Legislative Council.

South Australia has also brought on same-sex marriage legislation this year that was defeated in the Lower House. During the debate Premier Jay Weatherill told Parliament gay marriage should be legalised to ensure the institution of marriage remains relevant to contemporary society.

Even though the ACT government has legal advice that the Assembly can legislate for same-sex marriage without coming into conflict with the federal Marriage Act, the Opposition Leader Jeremy Hanson disputes this. He believes that it is inappropriate for the Assembly to even debate marriage equality legislation, and that any same sex marriage law that passes will not be able to avoid a high court challenge.

Both positions are correct. Same-sex marriage laws are very likely to pass the ACT Parliament, making our smallest Territory the first to legislate for same-sex marriage. But it is also highly likely that these new laws will be challenged in the high court.

The question is, will this challenge be successful?

Prime Minister Tony Abbott has now put on the record that he is seeking advice as to the constitutional legality of ACT’s legislative attempt.

The new Prime Minister is a well-known opponent of same-sex marriage and has previously not allowed his Liberal and Nationals colleagues a conscience vote on the issue. This is despite many Liberals, including Malcolm Turnbull and Kelly O’Dwyer, supporting the legalisation of same-sex marriage.

According to constitutional law expert George Williams, Mr Abbott can attempt to overturn the ACT legislation in two ways:

This second option is similar to steps the Howard Government took in 1997 when it overturned the Northern Territory’s voluntary euthanasia law. Its success will be very much determined on Abbott having the numbers in both Houses.