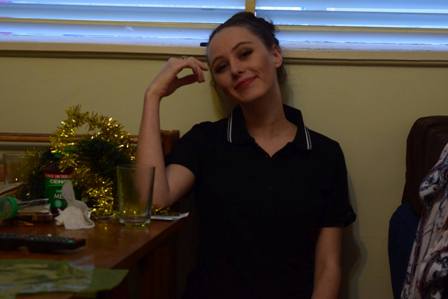 Name: Eliza Graves-Browne
Age: 22
Occupation: I currently work as a Digital Copywriter, Freelance Journalist at VICE and Features Writer at Lip
Location/Hometown: Melbourne, VIC.
Describe yourself in one word. Me!

What inspires you?
I think I have a love-hate relationship with humanity. I am horrified by the destruction we are causing to the earth, as well as the amount of racism, sexism, persecution and violence that exists. I am a firm believer that people are, for the most part, products of their experiences and what they know. The hope that people will change is constantly inspiring me to try to educate and share through my writing.

When did you first begin identifying as a feminist?
I grew up in a small town and although I was always aware of gender inequalities, this wasn’t framed in a feminist conversation. When I moved away from the country to the city, I had confronting experiences that made me fully realise the extent of systemic sexism. I started reading a lot more about feminist theory and also started writing for Lip. This is when I first started to fully understand what it means to be a feminist, and began to comfortably label myself as such.

The fact that women make up two-thirds of illiterate adults reveals the grand scale of gender-based disparity and the way this transcends into an unequal social system. In developing countries, access to educationis far more difficult for women than men. In 2013, a UNESCO report showed that one out of four girls in developing countries had never completed primary school, despite studies showing that higher rates of education increases involvement in the labour force, political involvement, awareness of legal rights and decreased child morbidity rates. It also lowers the rate of domestic violence, sex trafficking, genital cutting, bride burning and general gender discrimination. These points alone should show how fundamental education is in increasing individual agency and decision-making, as well as women’s rights overall.

In developed countries, lessons on feminism and sexuality should be incorporated into our education system and taught at an earlier age, placing focus on intersectionality to widen understanding in how gender interacts with various social identities. New initiatives targeted towards men are also vital, such as Duke University’s recent inclusion of a program for male feminists that aims to deconstruct male privilege and toxicity. Many people, both male and female, are ignorant to the extent of inequalities today, the power balances that exist and the systemic sexism in daily life. Coming from a white-cis background, I realise how easy it can be to overlook your own privilege. I think that education is key to understanding the issues that go on and our place within them.

What do you believe are the biggest challenges facing women today?
Many people justify the systemic sexism that exists today because it’s not as obvious as it used to be. This completely undermines the experiences faced by women on a daily basis. Our lives and the way we see ourselves are shaped by the institutionalisation of sexism – how we should act, what we should wear, how we should speak. Fighting the normalisation of these dynamics is one of the biggest challenges facing women, both because they are so ingrained and because of the lack of understanding/acknowledgement surrounding them.

Like micro-aggressions, acts of gendered violence have also moved “behind closed doors” to fit with outwardly acceptable norms in society. Although one woman a week is being killed due to domestic violence, there has been very little substantive government action and the public seems to be stuck in a victim blaming rhetoric. There are also other issues of unequal pay, representation, childcare and body image. I think the way these challenges can be genuinely dealt with is through more public campaigning that will hopefully cause a shift in community values.

Which feminist stereotype bothers you most? Why?
I find that the stereotype that all feminists are angry, irrational extremists is used to avoid acknowledging that this global movement might be based upon something valid. This frustrates me because it is also commonly used by men to avoid thinking about individual actions that might be perpetuating the experiences we speak about.

Do you believe young people are disillusioned by feminism?
I think feminism has become a divisive term in modern day society and is often considered “jumping on the bandwagon”. The predisposed ideas that many young people have towards feminism stop them from understanding why it’s still needed, and more importantly using it to frame their own experiences. The subtle and private way that sexism and gendered violence often plays out reinforces this by making it more difficult for people to understand their experiences in the context of a larger power dynamic. I also think there is a lack of understanding between the different branches of feminism, like liberal and radical, which can make the movement seem incohesive and unproductive.

What does the future of feminism look like?
Although I don’t know whether this is truly possible, I hope that one day we can achieve a stable egalitarian society where feminism no longer needs to exist. For now, we need to focus on getting women’s issues acknowledged as human rights issues and gender-based violence understood as a global epidemic. We need to increase cohesiveness and include intersectionality in feminist conversation. Our society is constantly and dynamically changing, as are our conceptions of identity and sexuality. In our fight for equality, we need to ensure that feminism remains a safe space that is founded on inclusiveness, informed dialogue and critical analysis.