ghostbusters: how to engage naysayers 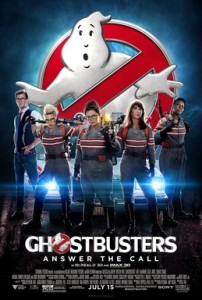 When a classic movie is remade or rebooted, when a book is made into a movie, when a new Bond, Superman, Spiderman or Batman is selected, there are rumblings of discontent in the fandom. Remember when fans thought Heath Ledger too pretty to be the Joker and Jennifer Lawrence too blond to be Katniss Everdeen?

None of those have come close to the vitriol hurled at the new Ghostbusters movie and its female cast. The movie might have raked in US$46 million in the US in its opening weekend but it is still the most disliked trailer on YouTube with 600,000 thumbs-down votes. For comparison, the Fantastic Four trailer from 2015 has only 20,175 dislikes. Ghostbusters director, Paul Feig and key its actors (Melissa McCarthy, Kristen Wiig, Kate McKinnon and Leslie Jones) have been on the receiving end of criticism that range from apologetic (‘Bill Murray is the only ghostbuster for me’) to demeaning (‘Ain’t no bitches gonna fight no ghost’).

Obviously many people have committed to disliking the movie even before watching it, so here’s a guide on how to engage them with or without dropping the word ‘sexist’. Point out that their nostalgia for Bill Murray’s Ghostbusters is set at a time when women did not rise above being the office receptionist. Give them examples when they should rallied against a change in a movie’s plot but did not. Exhaust them with enough pop culture trivia that they acknowledge their hypocrisy.

‘How dare they remake a classic!’

Actually, remaking a classic movie is a Hollywood tale as old as time. We now live in an era of 80s movies and TV remake, as the kids of the 80s are now grown adults trying to recapture their childhood favourites while updating it for the new generation. In fact, every five years or so a new Spiderman and Batman gets casted. I am now old enough to know at least three Spidermans and four Batmans, which I use as a barometer for my ageing.

One of the most portrayed literary human character in film & TV is Sherlock Holmes and in the latest remake with Benedict Cumberbatch, it is set in the present day as opposed to Victorian era.  Elementary, another contemporary remake is set in the United States, starring Jonny Lee Miller as Holmes and Lucy Liu as Watson. If fans were unhappy about the changes in setting or Watson’s gender, they have been very quiet about it.

‘Why can’t we have a proper sequel?’

The short answer is that comedy sequels do not often work. Jokes and deadpan humour work best when you do not see it coming, so if the sequel relied on the same material, the audience will not be amused. This is why Zoolander fans would rather forget Zoolander 2 exists.

When people talk about Ghostbusters, they are referring to Ghostbusters 1 which debuted in 1984, became a surprise hit and spawned a cartoon series and Ghostbusters 2. While Ghostbusters 2 was a commercial success, it did not wow fans and critics. Still, fans kept asking for a Ghostbusters 3 movie but for years Bill Murray turned down scripts for the third Ghostbusters instalment. When Harold Ramis (one of the original Ghostbusters) died in 2014, it put an end to any chance for a cast reunion. Which bring us to the next point.

‘Is this new movie a reboot, remake or sequel?’

A common complaint about the new Ghostbusters is that people are confused about where it fit within the movie timeline from Ghostbusters 1, 2 and the TV series. The new Ghostbusters trailer caused more confusion because it opened with the line ‘30 years ago…’, ,making it seem like a sequel or a passing of torch to a new cast. We’ll have to put that down to clunky marketing.

For clarity, the new movie is a reboot. It takes place in a world where the original movies and characters did not exist because Paul Feig thought it would be better for a new generation of audience to see an origin story instead of seeing the new ghostbusters being handed technology. So, we go right back to the start and see how they develop their ghost catching technology, how they get their office space and where they get inspiration for their logo.

‘I don’t recognise this updated version!’

Ghostbusters was about four people fighting ghosts and the new movie is still about that. The theme song is the same, it is still set in New York and in both movies their ideal office is an old firehouse. There are also scene-by-scene comparisons that shows how the new movie paid homage to the original, like how both movies start with a member of the public encountering a ghost in place that would become essential to the movie.

If we want to talk about an updated movie franchise, let’s look at the Bond franchise has evolved. Daniel Craig’s Bond bears little resembles to Sean Connery’s Bond. Craig’s Bond is less campy, less reliant on ridiculous gadgets and does not always say the catchphrases that we have come to associate with Bond (‘Shaken, not stirred’, ‘The name is Bond, James Bond’). What’s even more shocking is the new Bond actually falls in love with Eva Green’s Vesper Lynd, an unthinkable character development for the notorious playboy spy.