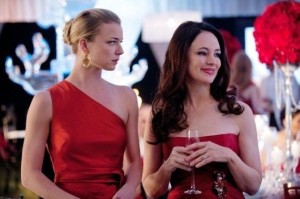 Need a new TV show to sink your teeth into? Revenge is a well-crafted, deliciously addictive drama that follows a strong-willed young woman named Emily Thorne (played by Emily VanCamp) who heads to the lavishly wealthy Hamptons for the summer. But she’s not there to enjoy the sun – she’s harbouring some deep, dark secrets concerning her real identity. We learn early on that Emily is not in fact her real name. She bears a birth certificate with the name Amanda Clarke. After her father was arrested for an act of terrorism when she was five, Amanda was shipped to a juvenile detention centre. Upon her discharge years later, she comes to the understanding that her father was in fact framed for these heinous crimes by his own employer – the Grayson Family.

Riddled with anger, Amanda takes on a new persona and returns to her childhood home to exact revenge on every person who played a role in the destruction of her family. Thanks to an investment her father had made with the local billionaire Nolan Ross (Gabriel Mann), she becomes privy to a substantial inheritance. With money at her disposable and the help of Nolan’s crafty ways, can Emily/Amanda right the wrongs initiated by the powerful Grayson’s?

If you want to find out, we have some copies to give away! Simply email [email protected] with the name of your favourite female TV show character. (*Only winners will be notified)

One thought on “giveaway: revenge”