in defence of writer worship 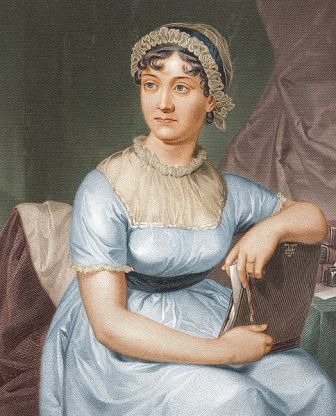 Three years ago, I travelled to England in search of Jane Austen. I‘d been a tragic Janeite for a long time. I could tell you exactly what Captain Wentworth wrote in his letter to Anne in Persuasion and recite the first few pages of Pride and Prejudice. Even as I write, my Jane Austen doll, a birthday present, still sits to my left, propped up against my desk. On the door handle hangs a ragged canvas bag. It reads, ‘I love Mr Darcy.’

It wasn’t just Austen’s writing that inspired me. It was her. I subscribed wholeheartedly to what Claudia Johnson calls Janeitism:  ‘The self-consciously idolatrous enthusiasm for Jane and every detail relative to her.’ I felt close to Jane when I read her novels and, like other fanatical readers, imagined that she and I would have been friends if we had met. I entertained this romantic idea that I’d feel a connection with Jane if I travelled to England and visited places of significance in her life – it was a literary pilgrimage.

It went first to the house in Winchester where Jane had died, aged forty one. You could hardly tell it was a tourist attraction. A modest square house, bricks painted pale yellow, curtained windows. I stood out front for a few minutes, and stared at the plain oval plaque, which was the only thing marking the significance of the site for literary pilgrims: ‘In this house Jane Austen lived her last days and died 18th July 1817.’  I willed myself to feel a magical connection but my eyes dropped to a sign below the plaque: ‘Private residence, no tours, no visitors.’ The sign slapped me and extinguished any stirring epiphany. Disappointed but not entirely defeated, I turned my feet towards Winchester Cathedral where Jane was buried.

As expected, walking into Winchester Cathedral provided a more bone fide spiritual frisson – there were no stern signs to break the magic. The cathedral was almost empty – just a few tourists reading brochures. I walked over to Jane’s grave and gazed reverently at the carved words on the stone. Again I willed myself to feel her presence. Not knowing whether I was allowed to or not I sat down cross-legged beside the grave and read the dedication:

‘In Memory of JANE AUSTEN, youngeft daughter of the late Rev GEORGE AUSTEN, formerly Rector of Steventon in this County, fhe departed this Life on the 18th of July 1817, aged 41, after a long illnefs fupported with the patience and the hopes of a Christian.’

Nothing happened. Or, rather, all that happened was that my arse became sore from sitting on the cold stones, and I lost feeling in my leg. I pulled myself up and hobbled out of the cathedral thinking how strange it looks to have f’s instead of s’s.

Julian Barnes has a similar experience in his 1985 article ‘The Follies of Writer Worship’. In it Barnes tells of his literary pilgrimage to France in search of his favourite author, Gustave Flaubert. Though Flaubert’s house had been demolished, Barnes hoped to find ‘a few scraps of memorabilia’ whose ‘aura would be enhanced by their scarcity’.  The article highlights the religious, or spiritual, element of the connection between author and reader. Words such as ‘shrine’, ‘relic’, ‘deference’, and ‘idolatry’ show how the reader can become a worshipper and the author a saint or virtuous martyr.

At the Hotel-Dieu, the hospital where Flaubert’s father was chief surgeon, Barnes finds a stuffed parrot – apparently the same parrot that sat on Flaubert’s desk when he wrote ‘A Simple Heart’. Barnes is elated. He feels connected to Flaubert: ‘This parrot had once stood on the writer’s desk; now, a century later, it stood in front of me. It was as though the parrot were a relay runner who had just passed on some invisible baton.’ Later, at another tourist site, Barnes sees a second parrot, also claiming to be the authentic one borrowed by Flaubert when he was writing. This second parrot slaps Barnes out of his reverie just as the rude sign at the Winchester house had slapped me during my search for Jane Austen. Barnes decides that worshipping the relics of writers is trivial. The most important thing is the connection the reader feels during the reading experience: ‘You may feel “close” to a writer when you walk round his house and examine a lock of his hair, but the only time you are truly close is when you are reading words on the page. This is the only pure act: the rest – from fandom to Festschrift – is dilution, marginality, betrayal – the higher sentimentality’.

For the most part I agree with Barnes. Writer worship and literary pilgrimages can’t replace the original magic of the book. And, like Barnes, I’m a little embarrassed by my devotion to a long-dead writer. But I still believe, or at least would like to believe, that there is something magical about visiting the hometown of your literary hero or holding the pen they used to write. This connection to the real lets me imagine a connection to the real writer. Although I didn’t feel any epiphany or ridiculous spiritual connection with Jane in England, I loved walking around Winchester and imagining how she might have walked where I had walked, or sat on the same park bench I sat on. Travelling on literary pilgrimages and seeing the relics of authors opens up a type of time travel to the reader – we can pretend we’re there with our favourite authors all those years ago when they wrote their novels. And we can pretend, as foolish as it sounds, that they might have wanted to be our friends.

4 thoughts on “in defence of writer worship”