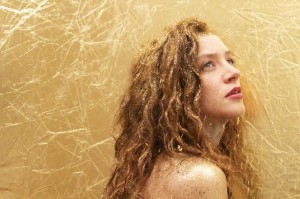 Appleonia (Jessica Kahn in her downtime) is literally feeding people with music. The singer, born in Argentina, bred in Australia, has developed a model that she says is a ‘win win’. For every free album ‘bought’, Vittoria Coffee has committed to donating the monetary equivalent of three meals to OzHarvest, a non-for-profit that takes excess food and gives it to people in need.  Appleonia tells me that she is really enjoying watching this new kind of transaction unfold. ‘I get to give something, people get something and give something, Vittoria gives something, OzHarvest gets something. No one loses out. It’s a fun model.’

After that transaction, as well as a sense of goodwill, fans are left with Appleonia’s debut album OH, a truly delightful mix of intelligent and layered indie-pop . The album comes off the back of the singer composing soundtracks and releasing music in collaboration with Ben Lee, experiences which she says were beneficial when it came to working on her solo project. ‘In everything you do, you’re picking things up – either consciously or unconsciously. Every project I do, I take my favourite things from it and learn and grow and figure things out.’ She is enthusiastic about the idea of collaboration. ‘I really enjoy collaborating. I find it really nourishing and stimulating.’

As a child, Jessica immigrated from Argentina, and she says that this has influenced her songwriting. ‘I’ve had a lot of different influences culturally. Being an immigrant has had a lot of psychological repercussions.’There is life and colour in the music on OH that can only come from experiences, both real and rich.

Appleonia feels strongly about creating music that, while being unique, tells of a shared experience. ‘I think what’s unique is something about the human experience. I think what’s unique is when someone touches on that. And it can be so simple, but resonate so deeply. It’s sort of like mythology; we just keep repeating a story. And with each repetition of the story, it just gets more poetic and beautiful.’

She recently joined Sarah Blasko on the Heavenly Sounds tour. They played in churches and cathedrals all around the country, an experience that the singer adored.  ‘It was so special playing in those spaces. I found it absolutely gorgeous.  You sing differently, people listen differently and it doesn’t matter what religion anyone is. It’s just something about the way those spaces are set up that brings the sense of sublime.’

Making music must seem like a bit of a labour of love sometimes, so I ask Appleonia what keeps her going. Compulsion, she tells me. ‘It takes different forms for different people, but for me, at the moment it’s an inexplicable compulsion to keep going. Whether it’s a good day or a bad day, you keep going.’ She attaches that compulsion to the thrill of the undiscovered. ‘There’s always something new to discover in a genre or a medium. Whether you know what you’re looking for or not is irrelevant. You just keep exploring.’

Before we finish up, Appleonia rounds up her answer to the last question, musing on what the future holds. ‘I feel like I have so much to learn and discover. The adventure is the driving force.’

Appleonia will launch OH at FBI Social in Sydney on Thursday, February 20. You can find tickets here . Download OH and do your bit for OzHarvest here.