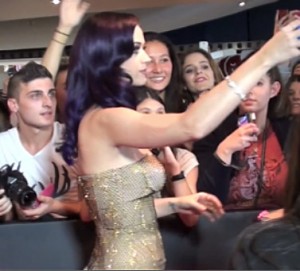 On Saturday June 30th, superstar Katy Perry attended the Australian premiere of her new 3D Documentary Part of Me, which chronicles her rise to fame. “This film followed me all of last year. It tells the story of how I got here and it shows some of the obstacles that I went through. It inspires people to learn that they too can fulfil their dreams if they want. They don’t have to change who they are  – they don’t have to fit in – they can stick out” Perry says with conviction.

Dressed in a stunning gold sequin dress, Perry explains how the film came into fruition. “I basically made the film” she says. “ I funded it myself – I put in $2 million dollars of my own money and I asked these boys to come out from London to document everything. I didn’t know it was going to be a major movie event”. The Magical Elves production company and producer Craig Brewer were also brought on board, along with Paramount Pictures who were “really helpful” she notes. “They believed in my vision which was really good”. The motivation to produce the film came from her desire to have a more human connection with her audience. “That’s what this film really means to me.”

Before heading into the screening, Perry provided a tip for aspiring musicians. “I would say you have to practise playing in front of people because that’s really important. Try open mic nights… test out your songs at those types of venues”.

Katy Perry: Part of Me 3D is in cinemas now. www.katyperrypartofme.com

One thought on “interview: katy perry on the pink carpet!”