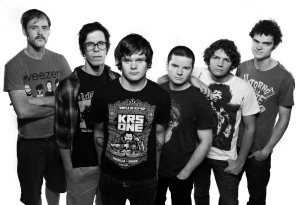 It was a chilly Canberran afternoon (in November!) when I met up with Los Capitanes vocalist, Tim Kent, to talk about the band.  We’d initially made tentative plans to meet on a Sunday, the day after the bands’ performance at Stonefest (a music festival held at the University of Canberra) but we rescheduled– giving the guys the day off. Somehow, I think I’d have been a little sus if the band members, award winners for their live performances, would have been up bright and early the day after the all day music fest…

Los Capitanes (The Captains in Spanish) was formed around seven years ago in the corridors of a Canberran high school. The band is made up of six guys: Jesse Sewell (drums), Dave Rodriguez (electric guitar), Rob Lee (trombone), Kieran Smits (bass), Tim Kent (vocals) and Julian Barker (trumpet), who combined become a mixed-bag of musical interests and talents. Los Capitanes’ music is a combination of punk, reggae, rock, metal, and ska – there’s often a mix of a few of the above on a single track.  The band is widely known for its ska style but, in their facetious style, state “like most ska bands, (Los Capitanes) wish to avoid being called ‘ska’”. Tim admits, from a business standpoint, the bands’ wide musical range can be a little hard to market, but there is a trade off for not confining themselves to one genre; there’s room to explore different styles of music and appeal to a wider audience.

“Basically, it’s an excuse to play whatever the fuck we want” says Tim.

And play they do! A few of the band members have a jazz background which makes for some awesome improv during their live shows.  When asked about the logistics of transporting six guys, instruments, gear, etc. to interstate shows, Tim concedes,  “I inevitably get five calls that morning asking ‘What’s happening? Where are we meeting up? Whose cars are we taking?’.”

But somehow it all comes together and the band has emerged with a reputation for delivering a dynamic live performance.

The guys remain loyal to their hometown of Canberra despite the (unfair) ordinary reputation of the local music scene (nothin’ like a bit of Canberra bashing, ay?). It can be a hard decision for local bands to make: stay in relatively isolated Canberra or make the move interstate and risk becoming one of the “Canberra bands that have gone to Sydney and been swallowed up”. But Tim optimisticly says it can work both ways because, “[being a Canberra band] is a bit of a novelty”.

It’s been a little while since Los Capitanes released their debut LP, No Fun Intended, and the guys are now gearing up for the December release of their new album, Rest For The Wicked. The album has been a long time in the making, close to two years, but Tim says the effort in getting it as close to perfection it was “absolutely worth it”. The time away isn’t easy for an upcoming band and Tim says it’s hard to suddenly return saying “We’re baaacckk! Come check us out”! However, fortunate timing (well… that, plus talent and a seven year slog of writing and performing music) has resulted in the band recently winning the renowned Triple J Unearthed competition and scoring the Stonefest gig– just weeks before the albums’ release. It’s been a big year for the band. In 2010 alone the guys have performed at the Canberran Australia Day concert amongst the likes of Killing Heidi and The Whitlams in front of 30,000 people. They’ve just won Triple J’s Unearthed comp and they’re are now ready to enter 2011 hot off the heels of their album release.

Enthusiastically describing the Unearthed win for the future for the band Tim says, “[it’s a] window of opportunity and you need to go through it. Really run through it!

Rest For The Wicked is released on the 3rd of December and you can preview a few tracks here!

One thought on “interview: los capitanes”