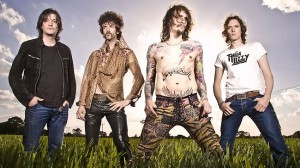 You would be forgiven for having to jog your memory to recall who exactly The Darkness are. No doubt you’ll have a niggling feeling that you’ve heard the name before, maybe you’ll hear a wailing falsetto in the recesses of your mind, but the image may seem a little blurry.

Be prepared for the memories to come flooding back though, as the cheesy rock group of the early ‘00s is back with a vengeance, and set to rock Australia with their upcoming tour in May.

The Darkness first made waves in the music world with their hit singles ‘I Believe In a Thing Called Love’ and ‘Love Is Only a Feeling’ in 2003, both of which featured on their debut album Permission to Land. After a second album, One Way Ticket to Hell… And Back in 2005, the band ostensibly ‘broke up’ in 2006 following the departure of frontman, Justin Hawkins.

Although it seemed pretty permanent at the time, with the remaining band members going on to form a new project, Stone Gods, and Hawkins starting up a solo project, Hot Leg, Hawkins now reveals that the breakup never felt that fixed at the time.

‘From the minute we broke up everyone was planning for when we’d get back together,’ he admits. ‘At the time we were all “fuck off, go away” but we sort of secretly knew.’

It must have been long-term intuition then, because a good six years passed since their last album before a reunion was announced last year. A lot happened in the interim for both Justin and his brother Dan (guitarist).

‘For perhaps the last three and a bit years my brother and I have been writing songs,’ Hawkins explains. ‘We had other stuff going on, I was working on other albums, my brother was producing other stuff as well, but we knew we were gonna do it. We just had to get the new material and write, and last year we started gigging and it sort of felt like a natural thing for us.’

Having reunited in March 2011 with their original line-up, the band started touring last year, and have been recording their upcoming album also. First single off the album, ‘Nothing’s Gonna Stop Us Now’ has a distinctly pop edge, with less of a guitar-driven rock sound than their previous releases.
According to Hawkins though, that’s no indication of the sound for the rest of the album.

‘There’s one or two pop things on there, including [‘Nothing’s Gonna Stop Us Now’] but it’s mostly rock. I reckon that song is sort of like a new equivalent to ‘Dancing on a Friday Night’ [popular single off Permission to Land]. Very old school shiny rock.’

The video for the single is also particularly cool, and well-worth a watch. Featuring animated versions of the band members, it’s jam-packed with pseudo-psychedelic, visually fantastic, fast-paced sequences that match the pace of the song.

‘The guy who did the animations is my favourite illustrator,’ Hawkins enthuses. ‘I didn’t expect him to jam so much actual stuff in it, though! I didn’t expect it to be that much of an onslaught. It’s pretty fantastic, every frame in it makes me laugh!’

With the single doing the rounds and the album close to finished, the band are on the road again, having just finished up a US tour.

Hitting Australian shores in May, The Darkness are playing shows in Brisbane, Newcastle, Sydney and Canberra. Australian audiences can expect classic ‘Darkness’ shows, with no surprises following their reunion.

‘I think we do what we do pretty well,’ Hawkins says. ‘It’ll be the same deal really, same guitar, same amps, wearing the same costumes ¬- it’s all good!’

Tickets for The Darkness ‘Nothing’s Gonna Stop Us Now’ Tour are on sale now! Check out their website for more deets!