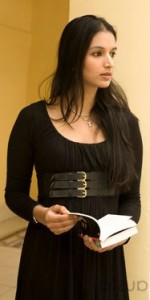 Ira Trivedi is the bestselling author of What Would You Do to Save the World?, The Great Indian Love Story and There Is No Love on Wall Street. Her latest book and first work of non-fiction is India in Love: Marriage and Sexuality in the 21st century, a landmark book on India’s new social revolution in marriage and sexuality.
During the Sydney Writers’ Festival, I had the privilege to speak with Ira about a woman’s place in society, and how we can further colonise the male-dominated political and social sphere.

Why should women rule the world?
Well, it makes sense to me considering what men have done to it so far. I think women make really good leaders – their brains are wired in a way to make them think from a multitude of dimensions. I think women are more natural caregivers – I just think they make very good leaders, and when we see women in leadership positions, we see they’ve done a very good job, and so I think more Women should be given a chance. At least, women should at least rule half the world, let’s give them that!

Do you think that women in power can ‘have it all’?
I think women can have it all, but it’s a little harder because they’re expected to do so many things, right? They’re mothers, and expected to do most of the childcare responsibilities, so because there is more stress on women to be women, yet in the workplace there is the expectation for women to perform equally well [as their male counterparts]. They’re expected to do it all, so I just think it’s very hard. If you take away all the “responsibilities” of a woman: being a wife, being a mother, then it is so much easier for her to become a man. In India, there are actually a lot of female leaders, and they don’t have families, they aren’t mothers, they don’t have husbands or mother-in-laws, which in India is a big figure in a woman’s life.

Have you, as a woman of colour, found any difficulty working as a writer and thinker in Western countries like Australia due to institutional racism?
I haven’t been here long enough to look out for that, and while I’ve been here I’ve received a very warm welcome from people. I guess it’s also selective memory. I’ve kept track of people who want to hear about my stuff, so I haven’t had any great opposition here, but I have so much opposition in my country [India], just because of books that I write, so if I did face it somewhere else, I don’t know if I’d have trouble facing it. There is a lot of backlash against what we do.

How do you find your practice of yoga affects your life and writing?
On a variety of different levels, it provides balance, which yoga does on a physical level and a mental level. It improves concentration which, as a writer, on a purely physical level you can be sitting at a computer for a very long time and find pain in your back and shoulders, so yoga has kept me going. It makes sense that as you get older, you actually face more problems so I think that’s it.

Also I would just say as a young woman, you’re constantly fighting with your body. I fought with my body all through my 20s, and I thought “oh my god, my weight gain, my weight loss….” And in America, of course, your body is so important. India is actually more stable than most other Western countries, so I really did battle with my body for many of my late teen years and early twenties, so yoga really helped me get over that. Once I really got deeply into yoga, I stopped fighting with my body. This was the way I could keep fit and keep healthy and keep my weight in control and the anxiety that comes with all of that stuff.

You once said ‘Fair and Lovely’ cream (a skin-lightening product) sells more than Coca-Cola in India. It is shocking!
It is shocking! Yeah, this really is clamping down on whatever feminist revolution is happening out there. It really is unbelievable.

What would you say to young women – either in India or Western countries – who are seeking political and social power in society? What would be your advice?
Don’t look for power. Look for creating change. It doesn’t necessarily have to be a position of power, you know. I think going for power is not the right attitude, but going for the ability to create an impact in whatever way you can, whether by wielding a pen or by wielding a microphone or whatever it is, that’s what we should be looking at.

One thought on “interview with ira trivedi”