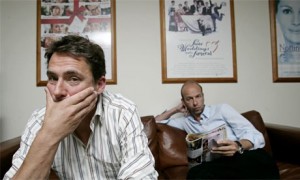 The producers behind Working Title Films – Tim Bevan and Eric Fellner – are responisle for a diverse slate of acclaimed films over the years. Their filmography includes titles such as Love Actually, Burn After Reading, United 93, Senna and State of Play (just to name a few). They discuss their work on the musical Les Miserables starring Hugh Jackman, Russell Crowe and Anne Hathaway, as well as the upcoming period drama, Anna Karenina featuring Keira Knightley and Jude Law.

How did you break into the industry?

Tim: We were both runners for various different films in London before we started working in music videos, which were very young at the time – it was in the early 1980s and we both used them as a springboard to making movies. We were both really, really lucky that our first films were critically acclaimed. So we continued producing for five or six years independently and then we joined forces in the 1990s, when we found backing, and that’s how it all started.

What do you look for in projects that you take on – what attracts you to a film?

It’s exactly that – just something that attracts us, we’re lucky that we’re in England where we’re not goverened by the cyclical trends of Hollywood filmmaking, so we can determine what we want to do, when we want to do it, and how we want to do it. We tend to develop material ourselves from scarth rather than buying scripts that have been written elsewhere. That’s what attracts us – whether it’s a $100 million thriller or a $3 million documentary.

The way films are being produced and accessed is constantly changing – has the filmmaking landscape changed for you much in recent years?

Tim: We’ve probably changed the least out of almost anybody, because we’ve been incredibly fortunate. We’ve made three-four movies per year varying in size. In order to keep going, we put a lot of pressure on bringing our budgets down now.

Eric: It also helps that we’ve built some big creative relationships because we’ve been at it for such a long time – there are lots of directors and writers that we work with consistently. We’re still pretty much single sourced and financed by companies like Universal – primarily we like to distribute our films worldwide, which gives them the best posible opportunity in the marketplace. 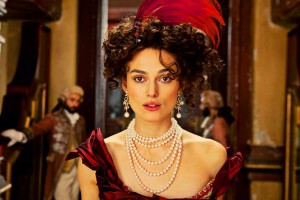 Over the next few months you have Les Miserables and Anna Karenina slated for release – what are the challanges in adapting such much-loved works?

Tim: Everyone has a pre-conception, particualty when you deal with classic novels – people have a visoin about that story which may have had  a big impact on their lives, so it’s very easy to fall off. It’s no coincidence that we went to the very best scriptwriters that we could possibly afford for each movie.

Eric: On Anna Karenina, the scriptwriter was absolutely disciplined in what would, and would not be in the movie. The discpline of screenwriting is unbelieveable – it’s a fascinating and unbeliveably difficult job.

How long did Les Miserables spend in the making?

Tim: Cameron Mackintosh who is our producing partner, nearly made it in 1987, but then realised he needed to let the theatre production grow (which it did). In 2009 a friend of mine suggested that we all get together and have a talk about it, and that’s how it came about.

Eric: In movie terms it’s quick – to get to a movie of this size, a period film, a musical, with big actors – to go from a show in 2009 to a movie it’s unbelively fast. It very rarely happens. It rolled. We wanted Tom Hooper to direct he said yes, we wanted Hugh Jackman to star, he said yes. You need a great cast and they all came at us wanting to be in it.

How important is star power?

Eric: I think you have to it – on Les Miserables it’s arguable that you could have made it with some less-renowned people, because the show is so big, but in order to go through all of the risk factors that were involved in making it into a movie, you need that name power because it’s going to drive a whole lot of people who woud’nt normally go to the film. Hugh and Russel are speaking to that audience. Same with Keira and Jude  in Anna Karenina.

Do you want to talk a bit about the decision to film the singing in Les Miserables live?

Tim: It was to make peope engage emotionally. It was Tom Hooper’s idea and he waned to ensure the emotional scale of the piece. Whether you like the movie or not, I don’t think they will ever do musicals in playback again after seeing this!

Les Miserables is in cinemas now, and Anna Karenina is set for release in 2013