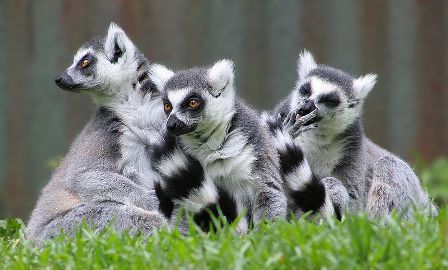 You know what would be great? Not needing a feminist movement at all. In a week where we saw our Prime Minister get served up as a quail, it’s nice to be reminded there are some species where women are top dog. Well, not technically dog. Not even mammal in all cases…

1. Spotted Hyena
It’s all about physicality for spotted hyenas. Generally, males tend to weigh up to 55kg, but females can get up to 64kg. When you’re that size, 9kg is quite a difference, and as a result of it, the female dominates. Also, what is really cool is that due to the structure of the female genitalia, it’s practically impossible for her to be raped – her clitoris is more penis shaped and her labia form more of a scrotum-like structure.

2. Seahorse
Preeeeegnant male! Yeah, there was no way I could not mention this.

3. Bee
Now technically, the queen bee isn’t the actual head of the hive – she serves as a reproducer –but all the worker bees are pretty much her minions. They bring her food, dispose of her waste and treat her to the occasional mani/pedi.

4. Ceratioid Anglerfish
You know how in Finding Nemo Dory and Marlin were being pursued by that scary fish that lured Dory with a light? That’s an Anglerfish. Males are much smaller than females and due to issues with their digestive system that stunts the growth of canals, they have to fuse themselves to a female or will they die.

5. Black Widow Spider
So, for some species of this spider, this is what happens after a sexy night in the bedroom:
Male: ‘Hey baby, was that as good for you as it was for me?’
Female: ‘OM NOM NOM.’
I assume some remains of the male will appear in her morning bog.

6. Praying Mantis
Like the black widow, there is some slight female sexual cannibalism, except she generally just takes the head. There’s no need to be greedy with these things.

7. Baboon
Baboon society tends to be dominated by females. This is probably because the females stick together and form a group for life, whereas the males move between groups throughout their lifetime, leaving if they lose the rank. Mind you, that’s just an educated guess. I’m certainly no science animal person who knows things about facts and stuff.

8. Elephant
Elephants live in matriarchal societies. The female is the head of the family unit and will determine the ranging patterns, although the males don’t tend to stick around for long.

9. Clownfish
All clownfish start male but can mature into females. A female is also at the top of the hierarchy and if she dies, a male will change sex to take her place. But back to Finding Nemo, this does raises some questions for me about Marlin…

10. Lemur
Across most species of lemur the society is dominated by the females. It is theorised that this is because of a combination of limited resources and seasonal breeding, but in some species the females are larger, which could have something to do with it too. There tend to be different social structures across all the different species, for example, male ring-tailed Lemurs usually act submissively as a full time job, but male crowned lemurs will only submit if the female is aggressive.